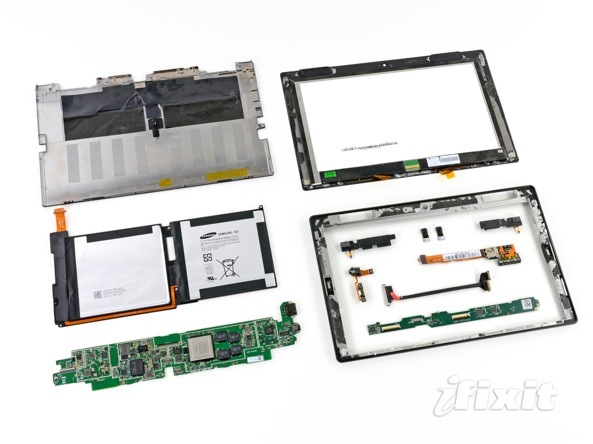 The repair experts over at iFixit pried open Microsoft’s Surface RT tablet (model number 1516) and awarded the device a repairability score of four out of ten (ten is the easiest to repair), thanks to several components being modular and replaceable without requiring desoldering. Plus, the battery can be removed “pretty easily”, iFixit notes.

This is better than a score of two out of ten for the third-generation iPad with Retina display, but lower than Amazon’s Kindle Fire, which has an impressive eight out of ten repairability score. Google’s seven-inch Nexus tablet is the easiest to repair among these tablets with a nice seven out of ten score. More tidbits and teardown analysis right below…

Opening the rear panel is not for the faint-hearted, the repair experts observe, and “it is impossible to remove the keyboard connector without first removing the display from the frame”, iFixit discovered.

In order to gain access to the glass and LCD assembly, “you’ll have to use a heat gun and lots of patience” and because they’re fused together and strongly adhered to the case, you’ll have to replace the whole assembly in case the display breaks, which ups the cost of replacement. 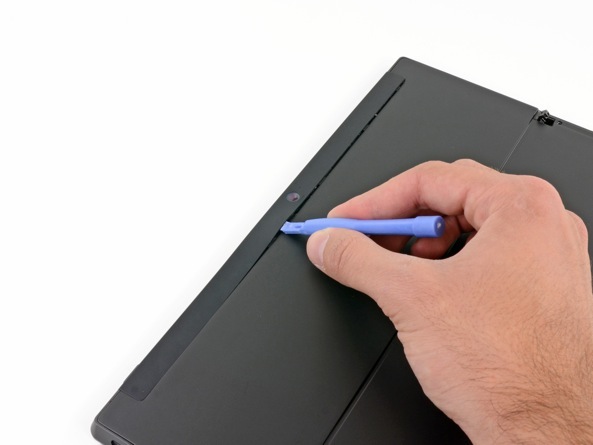 It took iFixit about half an hour and a lot of careful prying to remove this plastic cover.

iFixit also found a tamper-evident seal which reads “Surface” and breaks apart upon removal. A Samsung-made battery is rated at 7.4 V and 31.5 Wh, which fits right in between the iPad 2’s 25 Wh battery and the iPad 3’s 42.5 Wh unit.

The big question of the day: is the battery easily removed?

Answer: Yes. It’s glued in, but it’s way easier to remove than on the iPad. A couple of minutes of spudging around, and it’s out.

The display labeled LTL106AL01-002 is supplied by Samsung.

We tried to remove the keyboard connector, but were disappointed to find it’s wedged firmly under the LCD. Replacing the connector will require either bending the magnesium frame or separating the display.

The Surface RT has a 10.6-inch ClearType HD Display with a 1,366-by-768 pixel resolution and is driven by a quad-core Nvidia Tegra 3 processor with 2GB of RAM. It also has stereo speakers and unlike Google and Amazon tablets, the Surface RT has two cameras, a 720p HD out the front and a LifeCam-branded camera out the back (it doesn’t do 1080p).

Here are the chips iFixit found on the motherboard:

The Surface RT also makes use of the ambient light sensor to automatically adjust screen brightness and has a couple microphones, presumably to increase the accuracy of voice recognition software.

Networking features include Wi-Fi 802.11a/b/g/n (via two antennas) and Bluetooth 4.0. Storage capacities come in two tiers: 32 or 64 gigabytes of built-in flash storage. Ports are plentiful on each side of the device.

On the right side, there’s your “Apple-esque” magnetic charging port, USB 2.0 and Micro-HDMI. The bottom holds magnetic connection for the Touch Cover or Type Cover and on the left are headphone jack and volume rocker.

Looks like Microsoft has done a pretty decent job designing its first tablet, don’t you think?