I have long insisted that Android people (lots of them, but not all) aren’t accustomed to pay for quality because Google envision Android as an ad-supported ecosystem, an extension of its business philosophy on the web. Some Apple fans were taken aback when Apple priced the iPad mini at $329 rather than $249 or even $199. While analysts believe the current price defends the iPad ecosystem from above and have no doubt the gizmo will be a smash hit, Apple’s head honcho of worldwide marketing Phil Schiller went on the record to defend the iPad mini’s price tag, here’s what came out of him…

The iPad is far and away the most successful product in its category. The most affordable product we’ve made so far was $399 and people were choosing that over those devices.

And now you can get a device that’s even more affordable at $329 in this great new form, and I think a lot of customers are going to be very excited about that.

Last year, over at 9to5Mac I opined about Android people reluctantly paying for quality.

At $329, the iPad mini isn’t the Nexus 7 or Kindle Fire killer, but it does a great job at containing Google’s and Amazon’s attempts to take the iPad on the mid to high-end with tablets having displays measuring eight or more inches in diagonal.

Schiller yesterday took a jab at Android by dedicating a significant portion of stage time to comparing scaled up apps on the Nexus 7 tablet to the 275,000 native iPad apps in the App Store, all of which work on the smaller iPad without any intervention on part of developers. 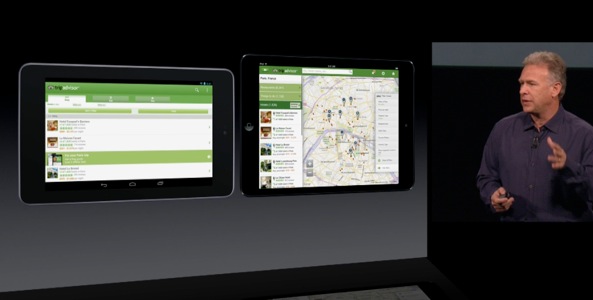 Apple design guru Jony Ive echoes the sentiment in the iPad mini promo clip, saying the device represents a “concentration not a reduction”:

Our goal was to take all the amazing things you could do with the full size iPad , and pack them into a product that is so much smaller. and that’s what we did with the iPad mini.

If all that we had done was take the original iPad and just reduce it, all you would be aware of, was everything that was just missing.

There is inherent loss in just reducing a product in size. And what we did was we went back to the very beginning. And we took the time to design a product that was a concentration of – not a reduction of – the original.

What do you think, did Apple price itself out of the market for tweener tablets with a $329 iPad mini?