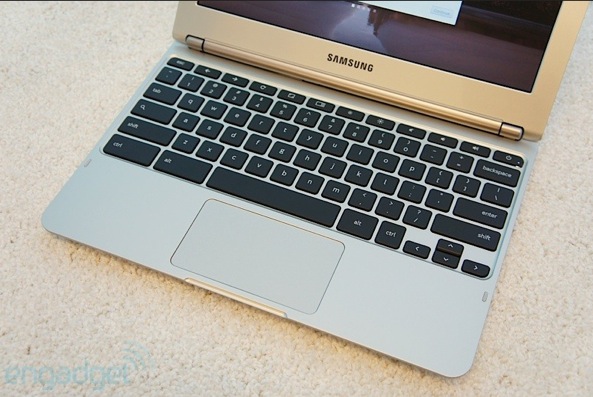 I kinda like the concept of an Internet-only notebook which boots in a few seconds, is always on and runs smoothly. I wanted to like Google-branded Chromebooks and almost bought one before realizing that Apple has already ticked all the right boxes with its iPad computer. But if a portable computing device with a physical keyboard which runs a browser-based OS and runs only web apps is your thing, this new Chromebook surely will pique your interest.

Apart from being a total rip off of the MacBook Air down to its black rounded keys, trackpad and the recess right where the lid opens, know that this Chromebook is a quarter of the Air’s asking price and half the iPad’s. On paper, the machine is a must-have: it weighs in at only 2.43 pounds, is 0.8-inches thick, runs 6.5+ hours battery and rocks a 11.6-inch display at a 1,366-by-768 pixel resolution.

Per usual, there are some caveats that a flashy commercial (included below) fails to mention…

The machine (via Endgadget) is built by Samsung and runs the Chrome OS on Samsung’s dual-core Exynos 5 chip which incorporates ARM’s Cortex-A15 CPU. Its firepower also stems from 2GB RAM, built-in WiFi a/b/g/n, Bluetooth 3.0 and sixteen gigabytes of flash storage.

It does 1080p video playback, has a front-facing webcam and comes with built-in Google Now and a hundred gigabytes of free Google Drive storage for two years. Other ports include a USB 3.0, another one supporting USB 2.0, an SD card slot and a headphone/mic jack.

Google’s going all out with the laptop so expect to find it online via Amazon, PC World and of course Google’s own Play Store, as well as retailers like Best Buy.

More info over at Google and in the official blog post.

I’ve read the reviews and looks like hardware compromises won’t be for the faint-hearted.

This here’s an excerpt from Stephen Shankland’s review for CNET:

My current favorite browser torture test, panning across my nine columns of Twitter feeds in the Tweetdeck Web app, can be slow. And something I hadn’t seen before: initiating a new tweet often takes the Chromebook 5 or 6 seconds before a window appears where I can type.

You seriously didn’t expect a speed demon for $249, right? 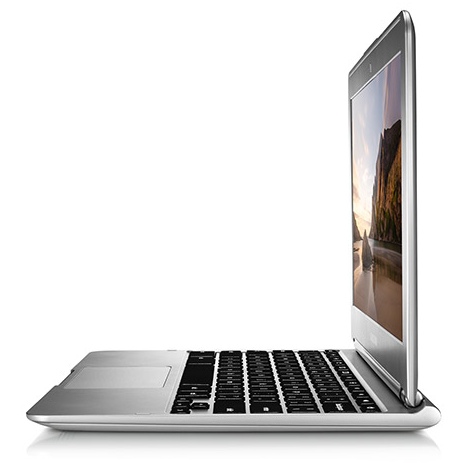 The more powerful Series 5 550 Chromebook continues to be available from Google’s web store at $450.

Now, the similarities between this Chromebook and Apple’s MacBook Air are particularly painful to ignore and Shankland agrees, politely pointing out:

Then again, what did you expect from a company found guilty of ripping off iPhones and iPads wholesale. Before you jump straight to the comments, I guess you could also say that it’s hard to expect Samsung to learn its lesson when judges in the UK rule that Apple has to apologize to Samsung.

Their previous Chromebook Series 5 550 did remind me slightly of the MacBook Pro, but this model is just too much for my taste. I’ll be passing on a $249 Chromebook and instead install Chrome OS on my MacBook Air via Parallels Desktop.

Considering Google is going to promote the hell out of the $249 Chromebook as we head into holidays, perhaps Apple should be concerned?