There’s been a lot of talk about Apple’s new dock connector lately. The company replaced its decade-old 30-pin connector with a new 9-pin Lightning plug in its latest round of iPhone and iPod refreshes last month.

Apple has reportedly added an authentication chip to its new cable to keep third party companies from making unapproved accessories. So the smart folks over at Chipworks decided to take a closer look at it…

Sure enough, Chipworks discovered four chips embedded inside the Lightning cable. The site writes three of them off fairly quickly, as they only contain a couple of transistors. But the fourth, it says, is very interesting. 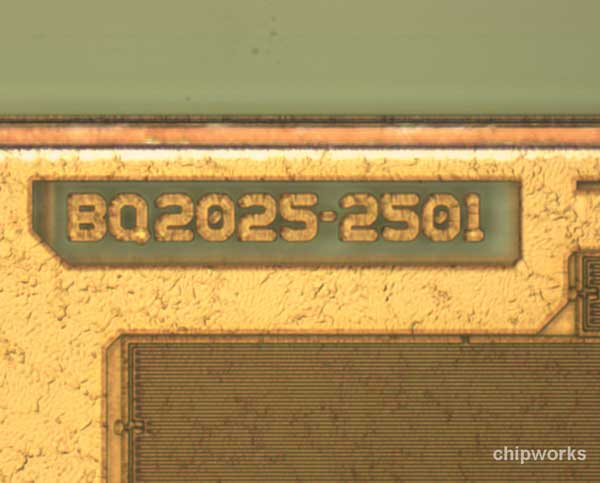 The fourth chip is made by TI (Texas Instruments), and carries a part number of BQ2025. And although TI doesn’t have any information on this component, Chipworks did some digging and uncovered this:

“However, TI does have published datasheets on the BQ2022, BQ2023, BQ2024, and BQ2026. These four chips are cataloged on TI’s website as battery fuel gauges, but they are not identical, with three of them being serial EPROMs and one of them being a battery monitor IC.

However, all four do have some common characteristics. All use a single wire SDQ interface (TI’s proprietary serial communications protocol), and all have some basic security features such as CRC generation. So, it is certainly likely that the BQ2025 does have some security implemented on it.”

The site says that it isn’t 100% sure that it’s a security device, but it’s fairly confident. It notes that it’s not very strong security  — it was reported last week that the authentication has already been cracked —  but it’s the first time they’ve ever seen anything like it in a cable.

For now though, at least, the security seems to be working. It’s been nearly a month since the iPhone 5 was released, and Lightning-compatible accessories are still virtually non-existent. It’ll be interesting to see how this all plays out. Especially with the holidays coming up.