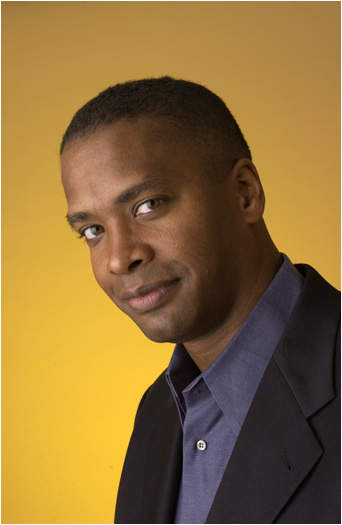 Following up on a revealing Sunday piece by The New York Times that looks at patent wars from both sides to conclude that Apple (like other tech giants) patents anything and everything just to prevent rivals from patenting the same inventions, Google’s chief legal counsel David Drummond has now called for an all-encompassing software patent reform.

Criticizing broken patent system in the United States, Drummond advocates for a change to make the system more akin to Europe and some other countries, which make it much harder to get a software patent of any kind, let alone something as basic as Apple’s slide-to-unlock gesture…

According to The Wall Street Journal, Drummond told the reporters at a Google-sponsored innovation forum in Seoul today that Google “is walking a fine line” in that it advocates reforms in the U.S. patent system in order to “reduce the amount of litigation around mobile computing software and devices”.

He said the U.S. patent system makes it too easy for companies to get patents on software. “There are places in the world where you can’t get a software patent, or at least it’s harder, like Europe,” he said. “We think that’s probably the better way to go.”

It doesn’t take much digging to find statements from Apple, Microsoft, all lamenting the fact that we have this patent litigation. These are not companies that say we’re all about patents and wake up in the morning wanting to think about patents.

He’s right, to a certain extent.

Google was never big on patents.

As I previously opined, Google reluctantly paid a whopping $12.5 billion to acquire Motorola Mobility, a money-losing handset maker – not to become a handset maker, but to leverage Motorola’s patent portfolio and deflect legal attacks on Android.

Drummond also thinks hardware patents should have precedence over software ones:

I would argue semiconductors fit the model for [patent] protection more than software does. We’re talking about algorithms here. In some ways, it’s math.

I think you’d want to be more careful about giving monopoly protection than you might for some hardware ideas. I don’t think we should just say ‘Well, this is the cycle we always go through.’

Google really appears to be in a state of IP denial over Android.

Patent expert Florian Müeller listed 17 valid Apple and Microsoft patents that Google’s Android software has so far been found by courts the world over to infringing.

In the meantime, Google chairman Eric Schmidt recently tried to mend a broken relationship between his company and Apple, also noting that “Google stands for innovation as opposed to patent wars” (news flash: so does Apple) and warning that “literally patent wars prevent choice, prevent innovation and I think that is very bad”.

On the other hand, some Apple patents appear to stomp all over the First Amendment, per Business Insider – especially the U.S. Patent No. 8,254,902 which describes “apparatus and methods for enforcement of policies upon a wireless device”.

Tim Pool has more on that.

According to a handy patent war map vividly explains, everyone is suing everyone in the smartphone biz (below is just a portion of it). 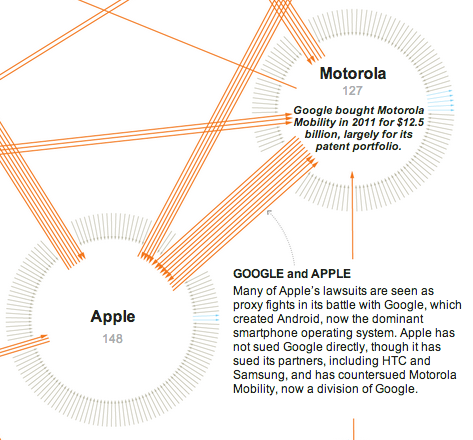 And this interactive feature (Flash required), outlines in layman’s terms the three three Apple patents the company successfully asserted against others in recent lawsuits: rubber-banding, slide to unlock and Siri.

Perhaps Drummond wants a change because Samsung, its key Android backer, has suffered a huge blow when a U.S. court awarded Apple more than a billion dollars in damages (Apple wants an additional $707 million).

The jury also ruled that the South Korean conglomerate slavishly copied the iPhone and Apple’s design and utility patents while Apple did not infringe upon a single Samsung patent.

The power of patents should not be taken lightly.

A former Apple engineer told The New York Times that the slide to unlock gesture “might seem obvious now, but that’s only after we spent millions figuring it out”. 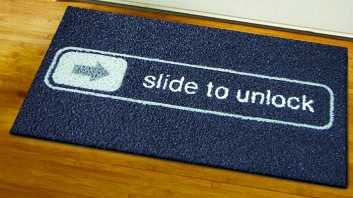 Millions or not, Apple has successfully asserted its slide-to-unlock patent against Samsung and Motorola in the past. As a result, competing handset makers steer away from slide to unlock, instead implementing other handset unlock mechanisms, such as pattern unlock and face unlock (see it in a video below).

In fact, it could be argued that Apple’s patented slide-to-unlock thing resulted in a greater variety of device unlock features, benefiting consumers as opposed to the one-size-fits-all approach which would have been made prevalent if Apple’s rivals were allowed to get away with implementing the slide-to-unlock feature.

Is the U.S. patent system broken?

Should we look to Europe for a role model on making it all but impossible to get a software patent of any kind?

Or perhaps a middle ground is what the world really needs?