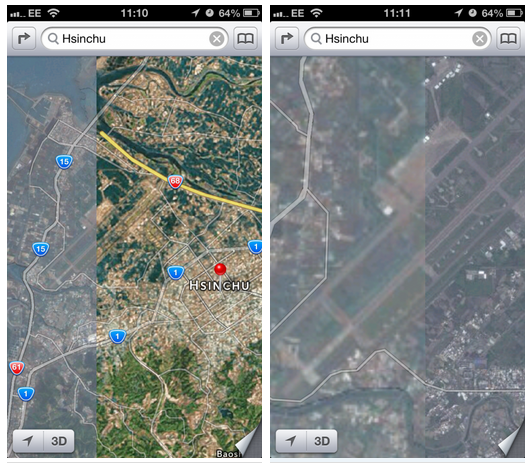 Trashing Apple’s iOS 6 Maps has become a norm these days, so it’s good to know that some people are quite concerned by the precision and quality of satellite imagery Apple’s using for the feature. According to a new report, The Taiwanese government wants Apple to blur the images of its brand spanking new early warning radar station, located near the Hsinchu Airbase in northern Taiwan and worth $1.4 billion…

The Next Web points us to a Taiwan News report quoting the Defense Ministry spokesperson David Lo who confirmed the government asked Apple to blur satellite images of its new facility.

The new radar station is reported to be located near the Hsinchu Air Base in northern Taiwan. In our tests, we saw that Apple’s Maps are already showing a clouded area around the base, but we are unable to confirm if Apple has obscured it following the official request.

“So Maps is good then”, The Loop’s Jim Dalrymple sarcastically noted.

As seen in the top image, Google Maps don’t show an obscured area similar to Apple.

According to Associated Press, the installation can monitor targets, determine their speeds and fire missiles to intercept them. It’s built with U.S. technology and expected to go online later this year.

In September, a report slammed Apple Maps over use of high-resolution images of a maximum security prison in Turkey. While Google Maps obscure sensitive locations, maps from Apple and Nokia typically do not.

The Verge has a nice comparison of high-resolution satellite imagery seen in Apple Maps and Nokia Maps, but blurred in Google Maps, including Aberdeen Proving Ground in Maryland and NATO’s airbase in Geilenkirchen, Germany.

Google was there in years past, of course.

However, following accusations that Google Maps pose a national security risk, the search Goliath has since chosen to blur sensitive locations.