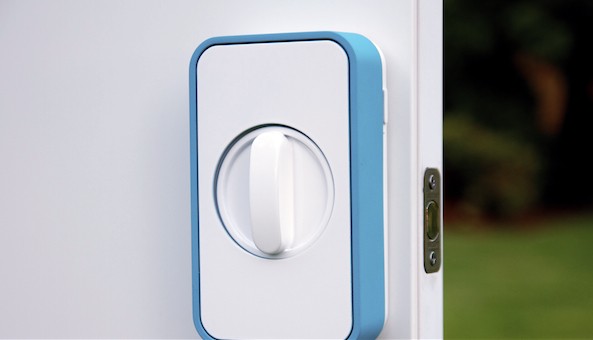 Shortly after introducing the App Store in 2008, Apple started running an ad campaign with the tag line “there’s an app for that.” It produced a series of TV commercials that highlighted iPhone apps that made otherwise arduous tasks, like counting calories and apartment hunting, a lot easier.

Apigy, a company known for its work with smartphone-controlled locks, just took the wraps off of its latest product: Lockitron. It’s essentially a device that attaches to your current deadbolt, allowing you to lock and unlock it remotely with your mobile phone via the Lockitron app, or even SMS. Watch:

Lockitron installs over your current deadbolt in seconds — not all models are supported, but most are. It then uses its built-in Wi-Fi to connect to your wireless network, enabling you to control it from anywhere in the world.

The device is actually pretty impressive. You can use the iOS app to lock and unlock your door, or, if you have a Bluetooth 4.0 device, you can set it up to unlock as you approach it. It’ll also send you alerts when your deadbolt is locked or unlocked, and you can even share access with friends and family.

Apigy is currently taking pre-orders for Lockitron, which is priced at $149 for a limited time. It hopes to start shipping the device in March of next year.

So, who wants one?