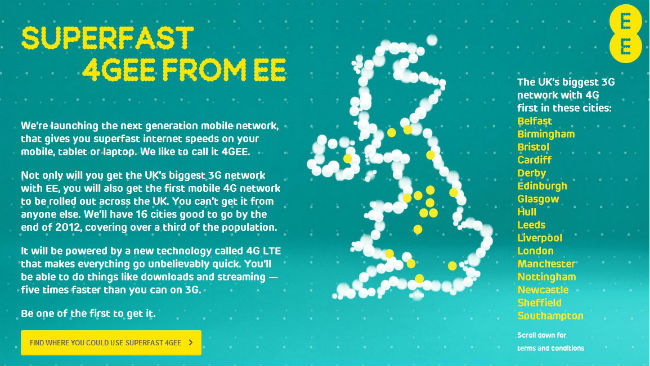 Folks in the UK who recently purchased an iPhone 5 will be happy to hear that in less then a month, they’ll finally be able to use the handset to its full potential. It’s official: the country’s first LTE network will go live on October 30.

The network belongs to EE (Everything Everywhere), which is a joint venture between Orange and T-Mobile. And the new 4G service will be available to existing customers on either of the two carriers, and obviously, new ones…

“EE (formerly known as Everything Everywhere) has announced that it will launch its new 4G service on 30 October. In a statement the company said: “We are delighted to announce that the official launch of our new customer brand, EE, offering the UK’s first superfast mobile 4G and fibre broadband service, will take place on the 30 October 2012.”

EE confirmed that it will launch 4G in ten cities on the 30 October. It will be available in 16 cities by the end of the year – which EE claims is equivalent to “a third of the UK population.”

Although subscribers on Orange and T-Mobile networks will start to see the EE symbol on their phones shortly, this doesn’t mean customers are getting the new 4G service. They will have to switch over to EE to be eligible for LTE.

For what it’s worth, LTE appears to be living up to the hype here in the US. iPhone 5 reviewers have raved about the 4G tech, and I myself was able to pull download speeds in excess of 30 Mbps during a recent trip to Portland.

What’s your take on LTE in the iPhone 5? Are you excited about its arrival in the UK?