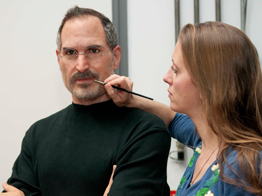 The statue costs just shy of $200,000 to create, and is the result of three months work from a dedicated team of sculptors. The figure will be officially revealed on September 27th, 2012, at Madame Tussauds Hong Kong, prior to touring other locations in Asia. 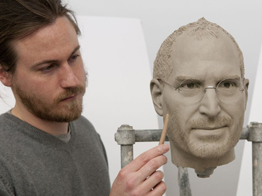 An incredible amount of work goes into the creative process for each wax figure, and the Apple co-founder’s likeness is no exception:

The techniques used to create the figure are extremely technology free, using the same tools and methods first employed by Madame Tussaud herself over two hundred years ago. The sculptors have anatomical knowledge to ensure every bone, muscle and tendon is replicated correctly according to the pose. When the clay sculpture is formed, each strand of hair is inserted one by one into the wax head by hand using a forked needle. Once complete, the hair is washed, cut and styled. Moreover, each iris is hand painted using gouache, and veining is added to the whites of the eyes with fine silk threads.

Currently, there are no details on whether or not the statue will tour outside of Asia, but given Jobs’ worldwide popularity, it would be surprising if it didn’t.

Do you think it looks realistic?