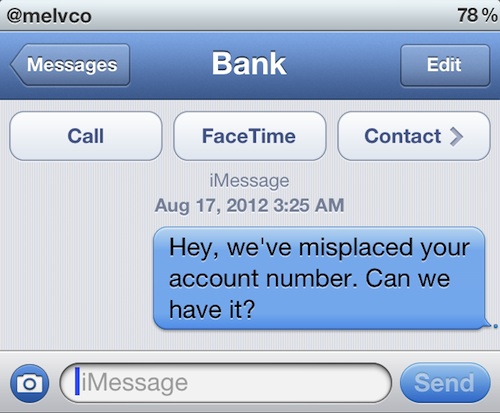 Last week, infamous iOS hacker pod2g released a report regarding a new security flaw he discovered in Apple’s mobile software. The exploit allows for SMS spoofing, and could be used for malicious purposes.

The following day, Apple issued a statement on the texting bug, saying that it was a problem that all manufacturers had to deal with. But according to a new report, that may not be the case…

InformationWeek passes along a report by security firm AdaptiveMobile:

“A flaw discovered recently in Apple’s iPhone could allow nefarious people to hack SMS messages. according to AdaptiveMobile, the iPhone stands alone with this security hole. AdaptiveMobile tested the exploit in the iPhone and compared it to Android, BlackBerry, Symbian, and Windows Mobile. All the other platforms remained secure in their treatment of SMS messages.”

This certainly seems to match up with what pod2g said in his original blog post. But the media, along with the help of Apple, have continued to assume that this is an SMS problem, not an iPhone problem.

The problem with that is, there’s no indication that Apple is working on any sort of fix here. And at the moment they’re just recommending that iPhone users send texts through iMessages instead of SMS.

Obviously, Apple could still correct the problem in iOS 6. But considering how crazy the media usually gets over security and privacy issues in mobile, I’m surprised that this hasn’t become a bigger deal.