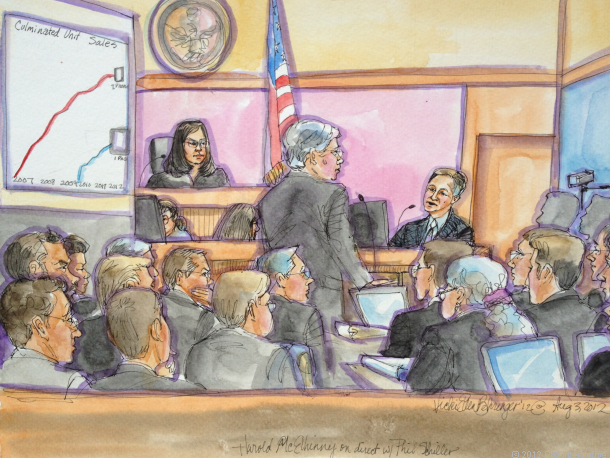 It’s been a long few weeks, but the high-profile trial between Apple and Samsung is finally starting to wind down. Yesterday’s peace talks between CEOs failed to yield any results, so tomorrow, the case will get handed to the jury.

Attorneys used their last day in court today to make their closing arguments and rebuttals. And while both parties made some compelling comments, it seemed like Samsung’s side made the more memorable impression…

AllThingsD, who has provided great coverage for the stretch of the trial, was in court today to hear closing arguments. First up, Apple:

“Faced with a “crisis of design” inspired by the iPhone, said [Harold] McElhinny, Samsung “copied and emulated” Apple’s designs without taking any of the risks that Apple had taken. “They were copying the world’s most successful product,” McElhinny said. “How do we know that? We know it from Samsung’s own documents. We see how they did it.”

“Samsung’s leadership was bound and determined to cash in on the iPhone’s success,” McElhinny continued, running through a series of internal Samsung documents revealing the company’s discussions of the iPhone and how best to match it. The end result of those talks: The Galaxy S, which did far better at market than Samsung’s earlier post-iPhone smartphones. “Samsung got what it wanted,” McElhinny said. “Its smartphone sales, which had been stagnant, suddenly took off when its first iPhone knockoff was introduced into the mix.”

McElhinny went on to make a number of strong points, noting that none of Samsung’s executives were willing to fly to the US from Korea to participate in the trial. “We called some of their top people,” he said. “Samsung had a chance to defend itself in this case. Instead of witnesses, they brought you lawyers.”

“Apple’s here asking for what it is not entitled to,” Charles Verhoeven said. “It’s here asking you to prevent its largest competitor from giving consumers what they want. …Rather than competing in the marketplace, they are trying to win in the courtroom. …It’s attempting to block its most serious competitor from even playing the game.”

“Your decision, if it goes Apple’s way, could change the way competition works in this country,” Verhoeven said…

“…Guess what, every single smartphone has a rectangular shape with rounded corners and a big screen,” he quipped. “Just walk through Best Buy. …So Apple is here seeking $2 billion damages for what? That little ornamentation on the screen. It’s amazing, really, Apple thinks it’s entitled to have a monopoly on a rounded rectangle with a touchscreen.”

Verhoeven finished up with a few other powerful points, telling the jury that Apple had not provided sufficient proof that consumers were confusing Samsung’s products with Apple’s. “There is no deception, no confusion, and Apple has no evidence of it. Consumers make choices, not mistakes.”

The entire transcript is worth the read, really. And for those interested, you can find it here. It kind of recaps the whole trial, and really gives you some insight into how both companies feel about the case.

I know one thing, I wouldn’t want to be on that jury right now, with $2.5 billion dollars and the fate of competition hanging in the balance. Both sides have made some pretty valid points, how do you choose?