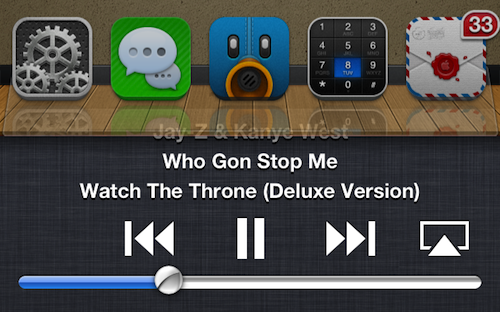 By default, Apple only gives you three places to access your iPod controls in iOS: the Lock screen, the app switcher, and the actual iPod app. This works out fine in most cases, but some folks want more.

And that’s where jailbreaking comes in. There’s dozens of tweaks to access these controls from other places like the Notification Center, and Spring board. And today, we add another one to the list…

SpringMusic is a new tweak from Ron Melkhior that allows you to access your iPod controls from anywhere in iOS. Triggered by an Activator event, the controls appear at the bottom of the screen.

Now, there are already tweaks available that allow you to make your iPod controls the first page in the app switcher. And if you are using one of those, you probably don’t need this. This is more for the folks that use an app switcher replacement like Imperium or some other customized setup.

Obviously there’s nothing groundbreaking here. But for the folks that need something like this, it works as advertised. If you’re interested, you can find SpringMusic in Cydia, in the BigBoss repo, for free.

Have you tried SpringMusic yet? What’d you think?