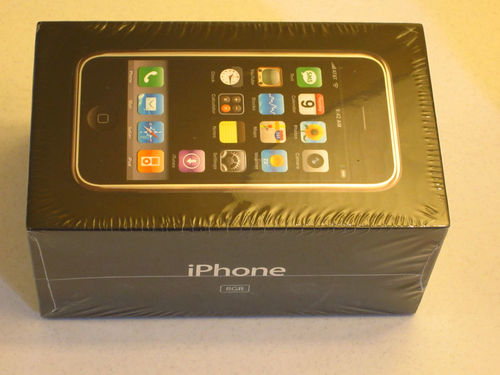 After months of rumors and speculation, Steve Jobs unveiled the original iPhone on January 9, 2007 in front of a large Macworld audience at the Moscone Center in San Francisco.

The handset would later become available for purchase on June 29 of that year, and the rest, as they say, is history. And now you can own part of that great history for a mere $10,000…

That’s right, an unopened 8GB 1st-gen iPhone has surfaced on eBay this week with a Buy It Now price of 10 grand. The seller describes the device as a “rare collectors vintage box set.”

“Stunning rare collectors choice Apple iPhone 1st generation 8GB and factory sealed!! You are seeing a piece of history!! This is an incredible collectors show piece!! This would be a crown jewel for any collection!!… …The collectors dream Apple iPhone!!”

The seller, samsonbible, obviously believes the device is worth the money, although there have been no bids. But for what it’s worth, he is a Top-rated seller and has 100% feedback.

And as it turns out, he’s not the only one who thinks so highly of the smartphone. Phsledge is also selling a factory-sealed first-gen iPhone for $10,000. But it hasn’t seen any bids either.

It’ll be interesting to see if either handset sells, because despite the fact that the iPhone was/is one of the most disruptive and popular consumer devices of its era, it can’t be worth $10,000 (yet).