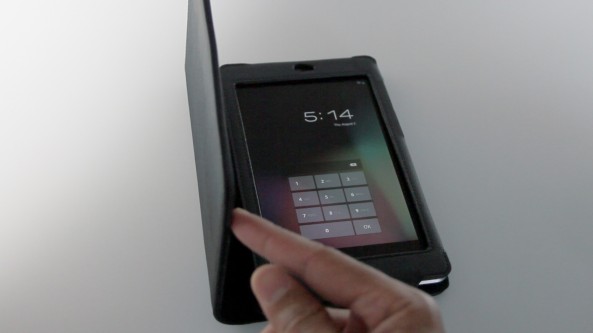 Today I received my Nexus 7 “Smart Cover”. Okay, it’s really just a bulky case, but it closely mimics the function of Apple’s innovative means of screen protection. I ordered it simply to compare it to Apple’s original version of the Smart Cover.

As you have probably heard, the Nexus 7 contains an unadvertised feature — magnets on the front right-side of the device, which very much imitate the iPad’s sleep/wake functionality.

Should Apple be upset with this unadvertised feature?

I’m assuming that Google and their Partner, Asus, resisted the urge to advertise the feature considering all of the litigation currently taking place between Apple and Android partners.

Although Google isn’t touting this as a feature, it’s obviously there, and it works exactly like it does on the iPad.

On Amazon’s website, one of the key features noted about the case I purchased was the “Automatic Sleep/Wake Function”. This is a feature that makes the case work like Apple’s Smart Cover. It contains magnets located in the correct place to interact with the internal magnets on the Nexus 7, thus providing the sleep/wake Smart Cover-esque functionality.

Interestingly enough, the actual package that the case comes in mentions nothing of this feature. Not one word. The feature is solely revealed on the Amazon website. I don’t know about you, but I find that to be peculiar.

At first I thought the function of the knock-off Smart Cover was gimped, and that it would only wake the Nexus 7 up to the lock screen. But after fiddling around with Android’s security, I was able to replicate the iPad’s sleep/wake functionality pretty much to a tee — unlocking the device to the Home screen without the need for a passcode, if done within a certain preset grace period.

This is, admittedly, a pretty shameless rip off, and it’s got me wondering why Google or Asus thought it would be smart to include it with everything going on in the legal landscape? Did they seriously think that not advertising the feature would be enough to let it slide under the radar? Not that I’m for all of the legal turmoil, because I’m not, it’s just that Asus seems to have left themselves open for litigation here.

By the way, the case itself is decent. It’s bulky, but it was designed to function as a stand, and includes a back cover for protection. It’s more akin to Apple’s new Smart Case, but it’s still quit a bit more bulky. The cover doesn’t open and close as seamlessly as it does with the real Smart Cover on the iPad, so the effect isn’t nearly as pronounced.

What do you think? How should Apple respond, or just let it go?