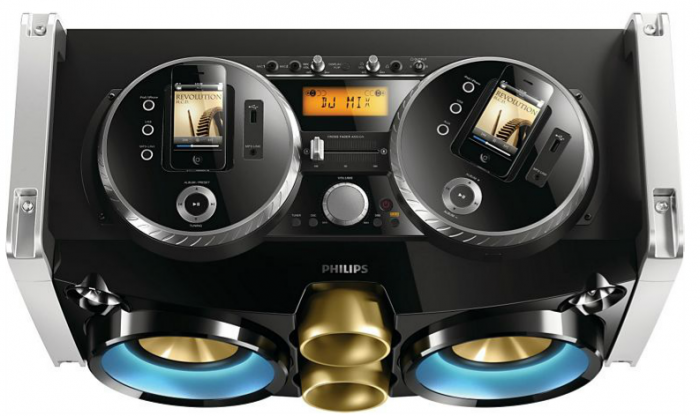 Every good party needs good music. And nowadays, most people seem to store most of their good music on their iPod or iPhone. So that makes iOS compatibility an important feature when you’re out shopping for a stereo.

There’s no shortage of music players that have a 30-pin dock connector, and there’s several to pick from that can connect to your device through AirPlay. But sometimes a Jambox isn’t enough. Enter the Phillips Mini Hi-Fi…

If you’re in the market for an over-the-top, iPhone-powered party machine, this is it. The Phillips Mini Hi-Fi system putts out a staggering 300 watts of power through two 5.25-inch woofers and two 2-inch tweeters.

It pulls the music from two separate iPhone docks, which are setup like DJ turntables with a working crossfader for switching tracks. Throw in an iOS app like Algoriddim’s Djay, and you’re ready to start party rocking.

Besides playing music, the Mini Hi-Fi also features a Dynamic Lighting system, that emits multi-colored lights from around the speakers. These lights will flash in sync with the music, so you’re party guests never miss a beat.

But of course, all of this awesomeness is going to cost you. The stereo is only shipping to the United Kingdom at the moment for 299.99 EUR or $470 USD. And that feels even more expensive when you consider that it could become obsolete in the next few months.

What do you think of the Phillips Mini Hi-Fi system?