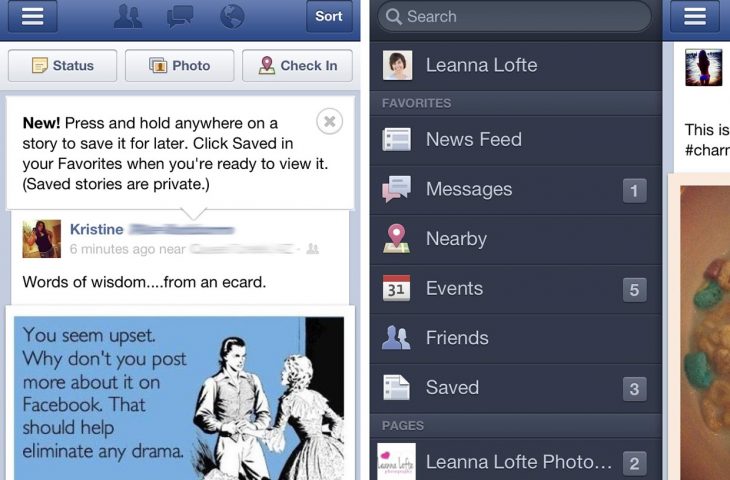 Recognizing a growing popularity of dedicated services that save articles for later reading, the social networking giant Facebook today quietly updated its backend to enhance its mobile and desktop apps with this functionality.

Aptly named ‘save it for later’, it does just that: you can now save other people’s posts for later reading through the new Saved option under the lefthand pane revealed when you tap the sidebar menu button…

This was first discovered by Leanna Lofte over at iMore.

The Saved folder is not visible by default and must be enabled by tapping the sidebar menu button in the iPhone or iPad app and hitting Edit Favorites at the bottom. Then, tap the + sign and select Saved from a list of apps and then hit Done.

When you want to save other person’s post for later, just hold your finger down on the post until a popup appears with the Save option. Everything you store in the Saved folder is private and no one but you can access these posts.

Furthermore, your friends won’t even be notified when you save their posts. To remove a post from the Saved folder, just hit the Unsave button next to the post. This feature also works in the Facebook.com web interface on desktop and mobile devices.

It’s even more straightforward: just hit a new Save button beneath every update to send the article to your Saved folder found under your favorites. Facebook is gradually rolling this out on the web so give it a little while if you don’t see the Saved folder yet.

Of course, there are plenty of web services and apps which collect items you favorited across social networks. My personal favorite is Favs by Dirk Holtwick, an awesome program for iOS  and Mac that supports a variety of popular services, including YouTube, Instapaper, Read Later, Facebook and more.

On the other hand, Favs collects everything I liked on Facebook whereas the new Saved folder allows me to cherry-pick the posts by my friends I find interesting and want to archive for whatever reason.

It’s a pretty useful feature, if you ask me, one that should have been provided a long, long time ago.

Do you plan on using the Saved folder in Facebook?

By the way, fan iDB on Facebook if you already haven’t.