Kodak filed for Chapter 11 bankruptcy protection in January and Apple’s been attempting to transfer its patent dispute with the imaging company out of bankruptcy court ever since, but to no avail. As Kodak now looks to sell off a trove of 1,100 patents related to digital cameras, smartphones and tablets, bidders are lining up, including the usual suspects, technology giants Apple and Google…

According to The Wall Street Journal, tech giants Apple and Microsoft plus patent-aggregation firm Intellectual Ventures Management are teaming to form one bidding group. The other group includes Google, Samsung, LG, HTC, TW and another patent aggregation firm, RPX.

A confidential naked auction is set for August 8.

The patents are being sold in two lots: the digital-capture portfolio related to capturing and processing images on cameras, smartphones and tablets; and the Kodak Imaging Systems and Services patents related to storing and analyzing images, among other things.

The patents represent valuable intellectual property that the Rochester, New York company thinks is worth as much as $2.6 billion, but it remains to be seen whether suitors are willing to pay up that much. Kodak has made more than $3 billion off these patents since 2001.

Apple’s legal dispute with Kodak stems from their work on the QuickTake consumer digital cameras that were produced by Kodak and sold under the Apple label in 1994. The QuickTake lineup was marketed for three years before being discontinued in 1997.

The QuickTake 100, seen below, was one of the first consumer digital camera lines. It lacked autofocus and zoom and worked only with Macintosh computers. On the plus side, it had a built-in flash and digital display and could take between eight and 32 photos. 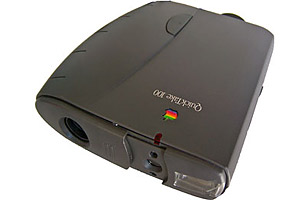 Kodak is now seeking compensation for the use of its intellectual property in Apple’s products.

Eastman Kodak in its golden days controlled a whopping 90 percent of the U.S. film market and 85 percent of all camera sales. It however became a victim of its own success in that the company didn’t have the foresight to realize that digital photography would turn the market upside down. Kodak was content with lingering to its analogue technology until it was too late.

Should the Apple-led group prevail, the iPhone maker could step up its legal fight against Android backers by asserting digital capture-related patents, especially given notable advancements Apple’s made with the iPhone 4/4S camera.

And what will happen if Google and Co. get gold of these patents?