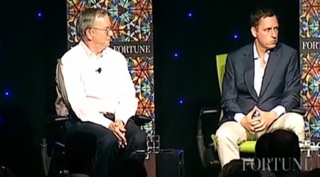 Google chairman Eric Schmidt offered some candid remarks when venture capitalist Peter Thiel asserted the search company has no creativity as to what to do with its $50+ billion cash hoard. Google is like a bank that generates an enormous cash flow, but it’s no longer a technology company, that’s Thiel’s challenge to Schmidt. Watch him destroy Google’s chairman in a video embedded right after the break and feel free to opine down in the comments…

The core problem we’re gonna have going forward is that you have two forces that are gonna govern much of what’s gonna happen in the future.

It’s basically a jobs problem and the solution is education, Schmidt remarked.

Than Thiel drops the hammer:

You have $50 billion dollars at Google. Why don’t you spend it on doing more in tech or are you out of ideas?

To this, Schmidt decided to just let Thiel’s statement stand. That didn’t sit well with Thiel, who went on to say that “Google is no longer a tech company”, adding this:

He likened investing in Google to betting “against the technological innovation in search”.

It’s like a bank that generates an enormous cash flow every year but you can’t issue a dividend because the day you take that $30 billion and send it back to people you’re admitting that you’re no longer a technology company.

The online retailer Amazon, according to Thiel:

Amazon is the only one in my mind of the big tech companies that’s actually re-investing all its money, that has enough of a vision of the future that they’re actually able to re-invest all their profits.

Video not playing? Talk to CNN.

While it is true that Google does not top the list of 10 biggest spenders on research and development, I wouldn’t go as far to say Google is just stashing its profits rather than invest into the future.

According to S&P Capital IQ (via USA Today) data from March 2012, a list of the top 10 companies and their R&D spending in the past 12 months looks like this:

Now, back to Google.

I mean, if anyone is incubating hundreds of projects in the hope that a few will make a difference, it’s gotta be Google. Besides, the Mountain View, California-headquartered company is throwing money at projects that are not its core business, such as self-driving cars and fiber Internet service

Here’s Google CEO Sergey Brin, Turkish President Abdullah Gül and his wife enjoying a ride in one of Google’s experimental self-driving cars at the Googleplex. 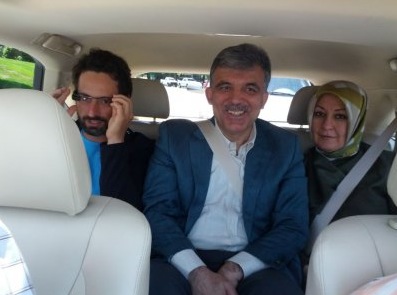 Google’s Glass Project also pops into mind. It’s not a piece o technology that will get mainstreamed anytime soon, but it certainly files as an investment into the future aimed at ensuring that Google stays at the forefront of technology.

What do you think, is Google just a money printing machine these days that doesn’t put its cash hoard to good use?