Boy, does Verizon Wireless know how to spoil AT&T’s unveiling of shared data plans from this morning. The Big Red carrier made a point by saying it now has more high-speed Long Term Evolution (LTE) coverage in the U.S. than all of its rivals combined.

In addition, the company announced today it’s flipping the switch on 4G LTE in 33 new markets. Verizon’s LTE is now in a total of 337 markets and the carrier is on track to cover more than 400 markets by the year’s end. Plus, it is broadening the coverage in the existing 32 markets which already have its 4G LTE…

According to a media release, Verizon’s 4G LTE is in“more markets than all other U.S. wireless providers combined”. The company has been pretty relentless in its 4G LTE roll out (here, here and here). It also retired grandfathered unlimited data plans as part of the LTE switch and launched shared data plans last month for smartphones, tablets and other devices.

Verizon’s coverage map boasts that only its 4G network is 100 percent 4G LTE among the four major wireless carriers in the United States:

With more 4G LTE coverage than all other networks combined, you can experience the speed and power of Verizon in more places. Verizon 4G LTE is available in 304 cities, covering more than two-thirds of the U.S. population. 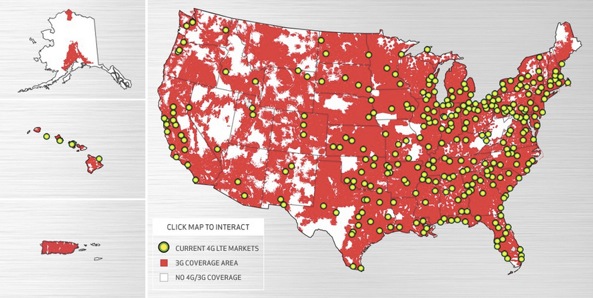 If you’re a Verizon customer and live in one of the areas with 4G LTE coverage, we’d love to hear about your experience with the network.

Is it speedy enough? Are you looking forward to 4G LTE?