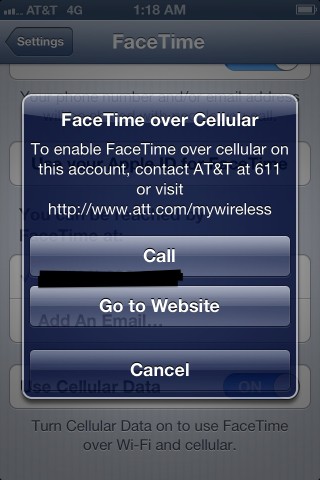 It almost seems unthinkable, but there is a strong possibility that AT&T might charge to enable FaceTime over cellular capability in iOS 6. 9to5 Mac posted a screenshot that shows a dialogue box prompting the end user to contact AT&T in order to enable FaceTime over cellular. This is indicative that AT&T could perhaps plan on charging customers to use this feature, despite the fact that their customers are already paying for the data.

As Mark Gurman notes, this is highly similar to the process that users go through to enable the Personal Hotspot feature on the iPhone. Of course, we can’t say for sure whether or not this “feature” will make the final GM version of iOS 6, but I’d say it’s possible judging from the screenshot provided from the iOS 6 beta.

The question is this: Is AT&T brave enough to actually go through with this, further alienating an already highly pessimistic user base? I can smell the backlash already…

To be clear, we’re still testing our iOS 6 installation to see what we find. Remember, that just because this pop up appeared in a pre-release version of iOS, doesn’t necessarily make it law. For the sake of conversation, though, tell us what you’d do if AT&T were actually to go through with this?