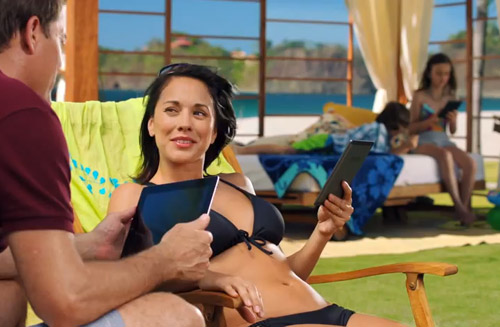 Online retailer Amazon has reportedly informed select developers that it will be launching a new version of its Kindle Fire tablet some time in the second half of this year, possibly in the third quarter, in time for the holiday shopping season. The new Fire allegedly has a much improved display running at HD-ready 1280-by-800 pixels, matching Google’s Nexus 7…

The next iteration of the Fire will be thinner and lighter than the original. It will also have a built-in camera and a much improved display.

It’s no surprise Amazon is adding cameras and an improved display because Google’s Nexus 7 has set the bar higher in terms of seven inchers.

As for the display, it’ll be a sight for sore eyes:

Not only will that apparently make it sharper and more vibrant, it will give it a different aspect ratio as well. In other words, the display has an entirely new width-to-height ratio.

Developers familiar with the device have been instructed to build their apps for a display with a 1280 x 800 pixel resolution, which is a bit different than the 1024 x 600 display of the current Kindle Fire.

The change is significant: that’s 67 percent more pixels at 216ppi, a 29 percent greater pixel density than the current Kindle Fire. Other rumored changes include a similar battery life, a faster chip, improved graphics and an updated version of forked Android software “to support that new display”.

Apple is speculated to be readying an inexpensive iPad costing between $249 and $299 and having a display between seven and eight inches diagonally.

I opined earlier in the week that Apple cannot afford to ignore the tablet market on the low-end, where competition is heating up as both Google and Amazon have compelling products. Backed with their brand names, both Amazon’s and Google’s tablets have hit the ground running.

Although these products are yet to put a real dent in the iPad’s dominance, the Fire is the most popular Android tablet and the 7 is bound to become a smash hit, if positive reviews are anything to go by.

Remember, the iPod music player had at first catered only to deep-pocketed customers until Apple added the nano and shuffle to the mix to cover a much wider range of price points. You can now get an iPod for as low as $49 (iPod shuffle) and all the way up to $399 (iPod touch). Who’s to say Apple won’t pull a similar strategy with the iPad?

Not everyone has five hundred bucks to burn on a tablet and Apple needs a cheaper product, not only to sell more units and keep its market share from eroding, but also to  ensure these potential customers don’t get locked in Amazon’s or Google’s ecosystem.