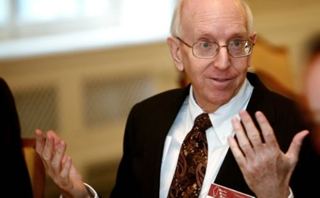 The U.S. Circuit Judge Richard A. Posner is known for his witty remarks in the courtroom. As in, he tossed the Apple-Motorola suit out of the window and told parties that they have to prove injury, adding “I’m sorry that it seems to be petering out like this”.

And in announcing the dismal, he proclaimed that “no more can Apple be permitted to force a trial in Federal Court the sole outcome of which would be an award of $1”.

He’s back now with candid remarks regarding technology giants going after each other’s throat in the courtroom. He also opined that companies like Apple are acting as if they were in “constant struggle for survival”. And wait ’till you hear his take on the broken patent system…

Reuters talked to Posner, 73, here’s what came out of him regarding Apple and its thermonuclear war on Android:

It’s a constant struggle for survival. As in any jungle, the animals will use all the means at their disposal, all their teeth and claws that are permitted by the ecosystem.

It’s interesting that Posner specifically volunteered to oversee the Apple-Motorola (“I didn’t think I could have a trial just for fun”), ensuring the litigants he was “really neutral” as he used a BlackBerry. However, he later replaced his court-issued BlackBerry with an iPhone upgrade.

In canceling the trial, Posner said an injunction barring the sale of Motorola phones would harm consumers. He also rejected the idea of trying to ban an entire phone based on patents that cover individual features like the smooth operation of streaming video. Apple’s patent, Posner wrote in his June 22 order, “is not a claim to a monopoly of streaming video!”

And this bit on the patent system:

It’s not clear that we really need patents in most industries. Also, devices like smartphones have thousands of component features, and they all receive legal protection. You just have this proliferation of patents. It’s a problem.

Finally – a judge with some common sense!

I’m totally with Posner and am damn sure you are, too.

The patent system is broken beyond repair.

Legal environment which allows for patent trolling and endless litigation is broken, too.

And who’s the primary beneficiary of this mess?