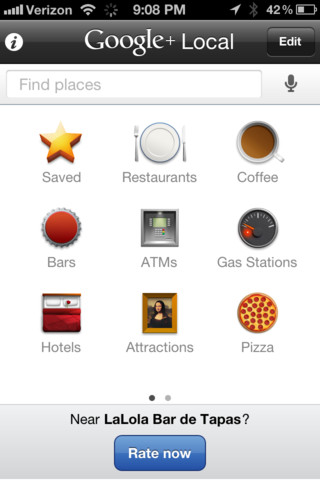 Google’s been streamlining their confusing set of web services and mobile apps since Larry Page took over the reigns as CEO from Eric Schmidt last year. As part of this simplification of Google, the company just updated its Places app for iOS. It’s now re-christened as Google+ Local and comes with a few new interesting features, including voice search and Zagat reviews…

Like many of Google’s iOS apps, voice search is now included — it actually works quite fast and does a decent job of understanding your speech. It’s not an “intelligent assistant” like Siri, but it does the job if you want to avoid typing. Of course, Zagat scores are now included alongside Google user reviews, and you can rate business and locations right in the app.

Google+ Local is a free download right from the App Store (it doesn’t support the iPad natively). Check out the screenies right below.

I must say, I love how the name change now reflects two big trends for Google.

First, their social thing, the Google+ network, being baked into their every product.

I also like how Google is actually acknowledging that people don’t use search as much on mobile and instead use apps to get to content at hand, be it maps, restaurant reviews, showtimes and what not.

And second, Google’s doubling down on the lucrative local search, especially with so many companies providing meta data for local places and points of interest.

Google earns a lot by serving the right adverts to users who search for places nearby.

With iOS 5, Apple began stealing some of those searching with Siri, which works with local data providers on local search.

I wasn’t a big fan of the Places app on my iPhone, but will re-consider the latest update.