For those of you wondering if Apple still has a strong cult following, here you go: a new survey from Goldman Sachs finds that 21% of iOS users wouldn’t switch to another platform, for any price.

The securities firm recently surveyed over 1000 smartphone users, in an effort to better understand the costs that consumers face when switching ecosystems. And this is what they found…

Out of the 1000+ participants, a whopping 62% of iOS users said that it was “highly likely” that their next smartphone or tablet purchase would be from Apple. And that number soared to 75% for users who currently own two or more Apple products. 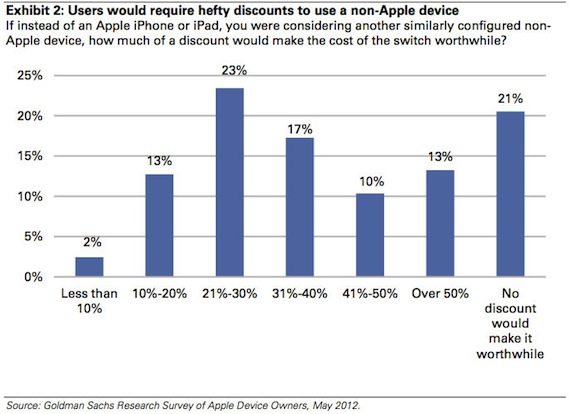 And apparently, price doesn’t have anything to do with their brand loyalty. When asked how much of a discount it would take for them to switch to another platform, 23% of those polled said that the cost reduction would have to be between 21% and 30%. And an astounding 21% said that no discount would make it worthwhile for them to switch.

Obviously, this is just a small poll. But these numbers are probably fairly indicative of the actual market. And it says a lot about Apple, as a brand, that 1/5th of its users would switch to Android, Windows 8, etc., even if you gave them free devices.

Are these just fanboys here? Or does Apple still offer the best all-around mobile platform?