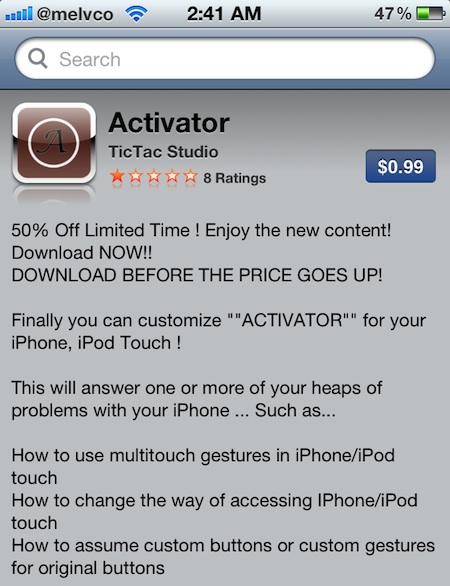 There appears to be a new trend developing in the App Store: create a crappy application, name it after a popular jailbreak app, and hope folks mistakenly buy it for $0.99.

As most of you know, Activator is a popular jailbreak tweak by Ryan Petrich. It allows you to toggle settings and perform other tasks via customizable actions and gestures.

But Activator, the app that just popped up in the App Store, isn’t anything like that. It certainly looks like it — the screenshots in iTunes are actually of Petrich’s app. But user reviews say it’s nothing more than a low quality wallpaper-maker.

As of this writing, there’s no disclaimer or warning in the app’s description that says that it’s unrelated to the jailbreak tweak. So make sure you give your less savvy friends a heads up.