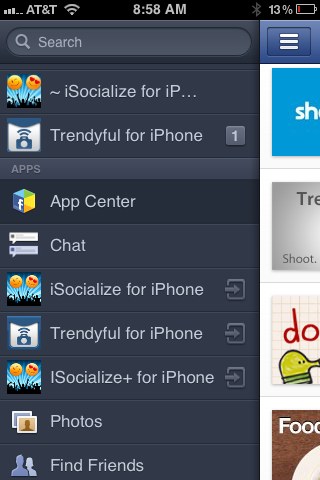 About a month ago, Facebook announced that it was going to be launching a cross-platform app store encoded entirely in HTML5. Dubbed App Center, the store would contain both third-party titles, as well as Facebook’s own creations.

The social network gave the store a tentative release date of “the coming weeks,” but we have yet to hear anything else about it. Until today. A screenshot of App Center surfaced this morning, leading folks to believe that a release is near…

TechCrunch published the above photo, claiming that it was sent in by a reader who claims to be already seeing App Center live in his iOS app. Well, it looks like it’s the real deal, as Facebook recently gave the site the following statement:

“Since we announced the App Center to developers last month, we’ve been testing it with a small  percentage of users. We have no further details to announce at this time.”

Facebook says that its App Center will become available to all users in the coming weeks, but we could see a lot more if it tonight during its app-themed press event in San Francisco. Make no mistake here, this is actually a very big deal.

The social network is already driving serious traffic to other app stores, responsible for more than 1.1 billion app visits this year. It hopes to build on that with App Center, taking advantage of its own data like knowing which apps its users have, and how often they use them. Imagine being presented with a game that you notice that all of your Facebook friends are frequently playing. Wouldn’t you be inclined to try it out as well?

Of course, only time will tell how successful Facebook’s App Center is. But the implications are gigantic. Written completely in HTML5, it — along with all of Facebook’s own apps — will be available on pretty much any device, anywhere in the world.

What do you think of App Center? Big deal, or pointless?