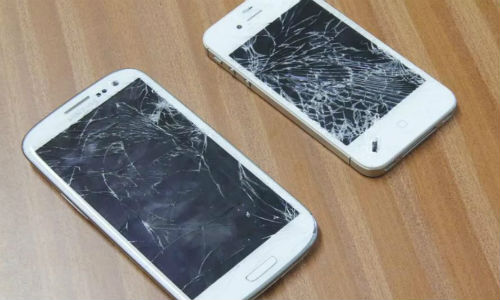 Ever since Apple unveiled the original iPhone, the handset has been a point of reference for the rest of the industry. It seems like every new device is pitted against the latest iteration of Apple’s smartphone to test its caliber.

The latest notable handset to play this game is Samsung’s new Galaxy S III. And while we’ve seen the device’s voice assistant take on Siri, and other comparisons, we’ve yet to see the two smartphones in a drop test. Until now…

SquareTrade, a Warranty Firm, decided to task itself with the painful job of smashing up multiple iPhone 4S and Galaxy S III handsets in an effort to see which smartphone can take the most punishment. Watch:

Unsurprisingly, both devices tend to break when dropped on concrete. But it’s fairly interesting that even though it sits between two sheets of glass, the iPhone 4S appears to best the Galaxy S III in the series of drop tests.

In fact, Apple’s taken a lot of heat over the past two years regarding the handset’s “glass sandwich” design, introduced on the iPhone 4 in the summer of 2010. It has even been the basis of a number of class-action lawsuits.

That being said, it’ll be interesting to see which materials Apple decides to use in its next-generation iPhone, particularly on the back. Recent rumors have suggested a number of possibilities, including both glass and aluminum.