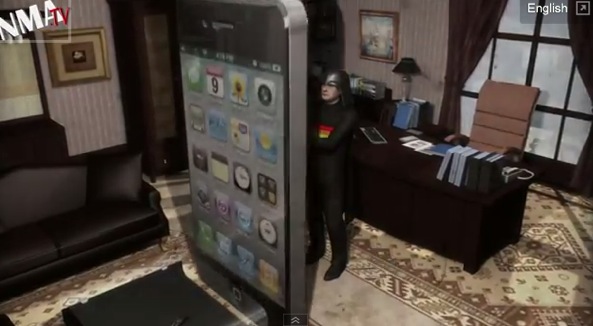 Those crazy Taiwanese animators are back at it, this time with a take on recent rumors calling for a bigger iPhone. True to their quick and dirty style, the somewhat cheesy animation takes us through the latest from the rumor-mill, both crazy stories and those corroborated by established media outlets.

We couldn’t resist sharing it with you as the clip kinda summarizes major iPhone 5 headlines, even if it’s taking inappropriate to new levels…

It looks all the pieces of the puzzle are slowly falling into place.

Despite Apple scoring a small victory in its ongoing patent litigation that saw new HTC phones being held up at the U.S. customs briefly, the company conceded the #1 smartphone vendor title to Samsung.

Meanwhile, critics keep saying that the iPhone is losing its allure due to its smallish 3.5-inch display.

Clearly, we need a bigger iPhone.

The Wall Street Journal gave the bigger iPhone meme a much-needed credence of credibility and Bloomberg raised expectations with claims that Steve Jobs oversaw its redesign.

Analysts are backtracking and are now saying that no, Qualcomm chip shortages won’t affect Apple’s 4G LTE plans after all.

And everyone else and their mother swear that Apple will introduce the next iPhone at next month’s WWDC, with sales pinpointed for an August-October timeframe.

Even developers are embracing the idea of a bigger iPhone and Apple added fuel to fire by securing the iPhone5.com domain name.

And now, topping it all off, Taiwan-based Next Media Animation distills all the iPhone 5 nuggets into a hundred second clip.

Yes, this is inappropriate taken to new levels, but that’s beyond the point.

What matters is the next iPhone and its display size.

Indeed, an iDB poll has revealed that nearly one in two would prefer a four-inch handset and every fourth polled person would feel comfortable holding an iPhone with a 4.3-inch display like that on the Galaxy Nexus.

So, do you think that bigger is better?

Make sure to vote in our poll and then come back here to share your thoughts with others down in the comments.