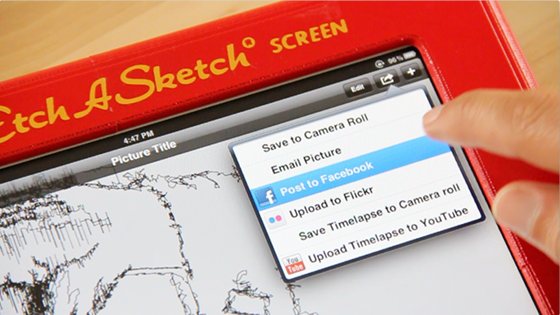 TechCrunch points to an interesting new Kickstarter project called Etcher, an iPad case that makes your tablet look like an Etch-A-Sketch. But this accessory does more than just drum up nostalgia — it actually works.

That’s right, unlike other Etch-A-Sketch cases, this one has real knobs that let you draw real lines on your iPad’s screen. So on top of keeping your tablet protected, you have a way to create impromptu sketches…

Perhaps the coolest part of the entire project is that it’s endorsed by the original Etch-A-Sketch makers. Etcher is completely licensed by Ohio Art, and as it turns out, it might even be manufactured in its factory.

“We are negotiating with a number of contract manufacturers. The most intriguing option is Ohio Art’s invitation for us to use the same factory that manufacturers the classic Etch A Sketch. Although it is more expensive than some the other options, we like the fact that they already know and understand Etch A Sketch. For instance, they know exactly what color red to use for the plastic-they simply use the same plastic they use in production!”

The case will include a free iPad app that will allow you to use the interactive knobs to create sketches and even share them via services like Facebook and Flickr. And yes, for those wondering, it does include the popular shake-to-erase feature.

Etcher has about a month left to get funded, and is currently [at the time of this writing] sitting at just under $10,000 of its lofty $75,000 goal. Pledge amounts start at $45, which will put you first in line for the product when/if it gets funded.

What do you think of Etcher? Cool?