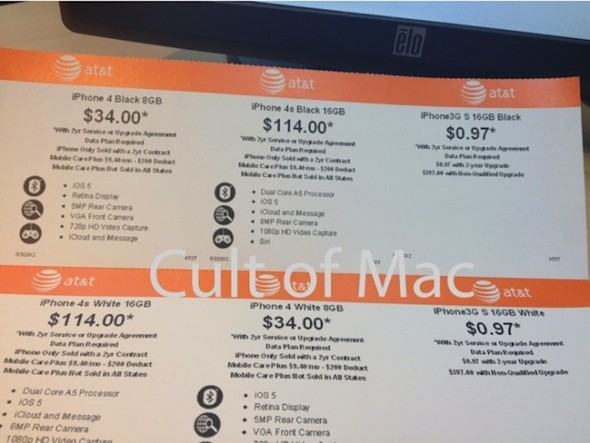 Among the third-party retailers that sell Apple’s handset, Walmart typically has some of the lowest prices. In fact, it’s been selling 16GB versions of the iPhone 4S for just $188 since last November. And it looks like it’s about to get a lot cheaper.

Cult of Mac has learned that Walmart is dropping the price of Apple’s latest smartphone (AT&T model) down to $114 with a 2-year agreement. It also appears that the retail chain is lowering the price of its 8GB iPhone 4 as well, down to $34.

Unfortunately, discounts were a glitch in the system, Walmart confirmed in an official statement…

Walmart just responded to 9to5Mac’s inquiry and said the retail chain “experienced a pricing error in limited stores” yesterday. The company spokesperson said the issue has been addressed and normal prices are now in effect: 16GB iPhone 4S for $188, iPhone 4 for $88, and iPhone 3GS for $0.97.

The rest of our original post follows right below.

Before you get too excited, we aren’t sure which — or how many — locations are offering these prices. The flyer you see above comes from a Walmart in Edmond, Oklahoma. My local Walmart here in Oregon doesn’t seem to be participating, and Walmart.com still shows $188 with the customary “Store prices may vary” warning.

It’s fairly interesting that the retailer is able to offer such big discounts on two of Apple’s most popular handsets. Sometimes, price cuts like this can indicate a product refresh, but we’re all but certain we won’t see a new iPhone until the fall.

At any rate, if you’re in the market for a new iPhone, it’s worth checking out the prices at your local Walmart. You could save some big bucks.

Have you noticed the price drop at your local Walmart?