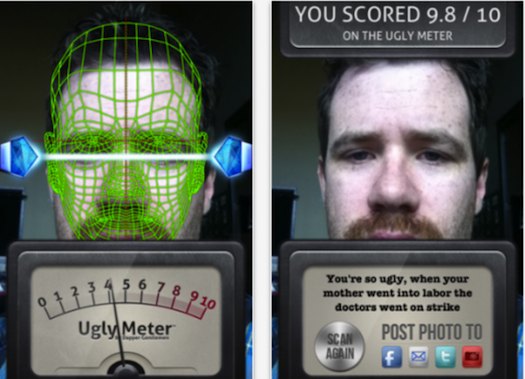 Ugly Meter uses your handset’s front-facing camera to scan (in other words, take a picture of) your face, and then rates your attractiveness on a scale of 1-10 based on a few different data points…

What the software claims to do is measure the “ugliness” of your face by analyzing its contours and symmetry. But judging by these tests conducted by the U.K.’s Daily Mail, it isn’t much more than a novelty.

That’s probably a good thing considering that the app throws out some pretty harsh criticisms for folks who score high on the ugly meter. “You’re so ugly, you could make a glass eye cry.”

Despite its seemingly offensive nature, the app has become quite the hit. It has seen over 5 million downloads, and has been featured on The Howard Stern Show and a number of other broadcasts.

If you find yourself wanting to put your “hotness” to the test, you can download Ugly Meter from the App Store for $0.99.

Have you tried Ugly Meter yet? Thoughts?