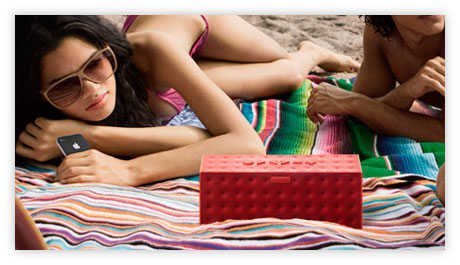 I like accessories Jawbone makes. Last year, I had a chance to test-drive their wireless portable speaker system, the Jambox, and to say that I walked away pretty much impressed would be an understatement.

As for the original Jawbone headset, it’s still widely regarded as one of the best Bluetooth headsets available.

The recently released iPhone health bracelet dubbed Jawbone Up also stirred up quite an interest, even with certain reviews have not been so favorable.

The latest from Jawbone is Big Jambox, essentially a blow up version of the original Jambox. This badass speaker system is a dream come true for party-goers as it provides more oomph, offers greater personality and promises more bang for your buck than its $200 predecessor…

The original design has remained virtually intact, save for a couple more buttons and a much larger appearance.

A larger box means engineers were able to squeeze more punch in the already high-performing wireless speaker design so expect some powerful, rich sound coming out of this boom box.

It’s also got a longer-lasting battery and new physical controls for skipping forward/backward and play/pause. 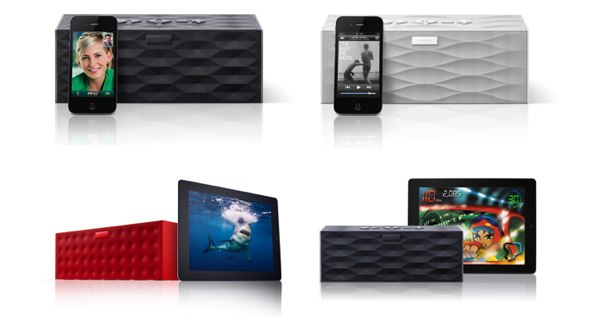 The system features an output capacity of 85 decibels and a pair of proprietary acoustic drivers that deliver extreme highs and rich bass line.

Proprietary acoustic drivers work in concert with an innovative moving-wall passive bass radiator and airtight enclosure to deliver shimmering highs and thumping lows that you can literally feel – the richest sound all in the palm of your hand.

The system works wirelessly with most Bluetooth-enabled devices, such as your iPhone, iPad or iPod Touch, as well as Android smartphones and tablets and most Macs or PCs.

And just like its miniaturized variant, Big Jambox sports a built-in 360-degree omnidirectional microphone with echo-cancellation for use as a wireless speakerphone in phone calls and video chats.

It also supports any device with a headphone jack or audio line out.

It’s a bit over the top, but the message is loud and clear: Big Jambox has plenty of oomph for the wildest parties you dreamed of throwing.

And if you’ve ever heard its little brother in action, you’ll know that Big Jambox speaks volume for itself.