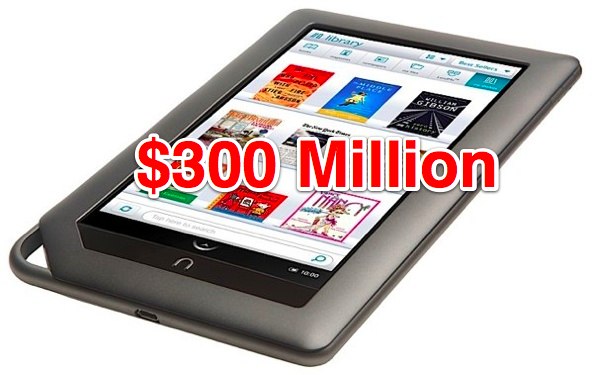 Microsoft just announced this morning plans to invest in Barnes & Noble’s Nook division, in an effort to better compete with the likes of Apple and Amazon in an increasingly competitive market for electronic books.

The Windows maker will form a yet-to-be-named subsidiary with Barnes & Noble, pouring a cool $300 million of its own money into the new entity. It will encompass all of the Nook biz, it has been confirmed, in addition to educational college content.

With this investment Microsoft is thinking big, securing a 17.6 percent stake in the new company valued at a whopping $1.7 billion…

According to a press release, the partnership will also see the release of a Nook app for the upcoming Windows 8 operating system:

One of the first benefits for customers will be a NOOK application for Windows 8, which will extend the reach of Barnes & Noble’s digital bookstore by providing one of the world’s largest digital catalogues of e-Books, magazines and newspapers to hundreds of millions of Windows customers in the U.S. and internationally.

Taking a page from Apple’s book, Microsoft clearly is aiming to secure premium e-book content for Windows 8 tablets, correctly recognizing that the tablet market is about ecosystems, not hardware.

It will be also interesting seeing how this strategic partnership affects the Nook e-reader, which is built on a forked version of Google’s Android platform. It’s too early to tell, but the news could indicate plans to switch future Nooks away from Android and build them around Microsoft’s Windows 8 platform instead.

Apple, of course, is facing an antitrust lawsuit as the Department of Justice (DoJ) alleges the company convoluted with five major publishers to fix prices in the e-book industry. Though three publishers settled with the government, Apple decided to fight DoJ’s accusations in court.

Experts think DoJ will lose the case, arguing there’s nothing wrong with the so-called agency model Apple employs for content sales on the iTunes store, which includes electronic books sold on the iBookstore. Apple lets publishers pick their own prices for e-books, taking its standard 30 percent cut on proceeds.

Contrast this to Amazon’s wholesale model that lets the online retailer set the prices, with publishers having little or no say over how their titles are being priced and promoted.

However, others point out that Apple is also requiring that publishers do not undercut their iBookstore releases on competing stores, which in itself might validate the government’s antitrust claims.

What do you think, is Microsoft’s partnership with Barnes & Noble going to change the dynamics of the e-book market?

For better or worse?