This is insane: tickets for Apple’s WWDC 2012 conference, which was announced earlier this morning, sold out in mere two hours. Nevermind the $1,599 price tag, tickets went on sale at 1:30pm GMT and by 3:30pm sold out.

In a way, Apple – itself based on the West Coast – screwed developers on the West Coast who woke up to the news that the year’s most important event has already sold out. Here’s to the hoping they put into effect a staged ticket roll-out on a per-region basis next year so all United States-based developers get fair treatment.

This year’s WWDC, which runs June 11-15 at San Francisco’s Moscone West, looks to be Apple’s most popular developer conference yet. I wonder if monster quarterly stats released yesterday and speculation of an iOS 6 preview could have anything to do with such a high interest…

Last year, it took the company some twelve hours to sell out tickets. WWDC 2010 sold out in two weeks. Apple’s annual developer pilgrimage has grown up over the years as its iOS platform gained market share on strong device sales. WWDC has now become Apple’s premiere showcase for its iOS and Mac platforms. 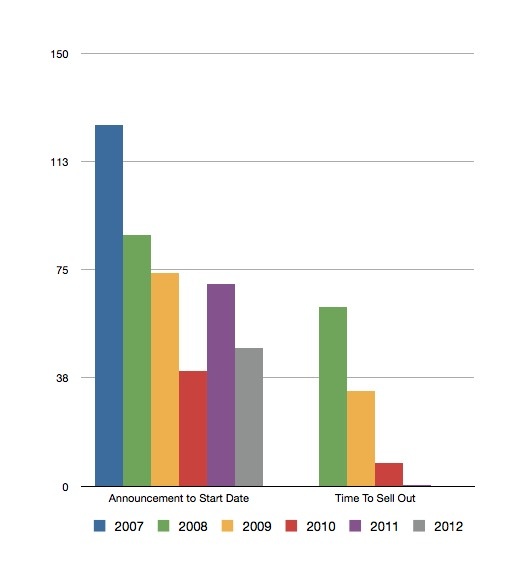 For comparison, Google I/O tickets cost $900 for general admission. And unlike Google, Apple doesn’t give away phones or tablets at WWDC.

What do you think which event will garner more headlines and attention, Google I/O or WWDC 2012?