Don’t hit the comments yet, this is nothing like the false Valve rumor. A surprising report straight from Ferrari’s website has it that Apple CEO Tim Cook along with heads of Google sat down for a two-hour chat with Ferrari CEO Luca di Montezemolo.

Remarking Cooks’ “openness and availability”, the car maker wrote that the sit-down meeting occurred during di Montezemolo’s trip to Silicon Valley last week, where he also gave a speech at Stanford University.

What did the two men talk about if not world-class industrial design and their common penchant for creating great products with the utmost attention to detail?

Ferarri wouldn’t reveal the agenda of the two-hour face-to-face meeting with Cook, but they did state the obvious – that the car maker and the iPhone maker share the same “maniacal attention to technology, but also to design”…

Passion was also the golden thread at the friendly meeting with Tim Cook: ”I was impressed by his availability and openness,” Montezemolo said leaving the headquarters after a 2-hour face-to-face meeting. “We’re building cars, they build computers. But Apple and Ferrari are connected by the same passion, the same love for the product, maniacal attention to technology, but also to design.”

Tom Cook wanted to see the FF from close up, Montezemolo had used to drive to Cupertino, admiring the shapes and the interior of the 4-door 4×4 from the Prancing Horse, excited about the sound of the 12-cylinder engine. Excitement Ferrari has always been stimulating all over the world and also here in Silicon Valley.

As for the distinct difference between how Apple and Ferrari operate, the one outsources all of its gadget manufacturing to China while the other makes its cars entirely in Italy.

Maybe Cook wanted to persuade Ferrari to let Apple build a high-end dashboard for its classy cars? Or perhaps Ferrari will bring the iPod integration to all its vehicles? 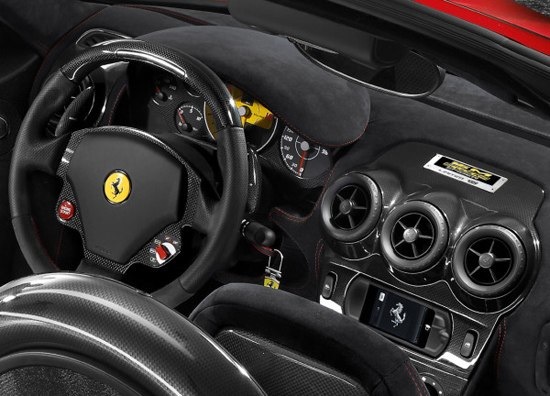 While we’re speculating, note that British tabloid The Sunday Times alleged in February 2011 that Apple’s London-born design guru Jonathan Ive was homesick for his £2.5m Georgian manor house in Somerset, allegedly wanting to commute from there to Silicon Valley.

Perhaps Cook was looking to bolster Apple’s design team with some Ferrari talent?

When Jobs returned to Apple from exile, he immediately began axing staff and he went on a search for an industrial designer. At first, Jobs considered many world-class outside designers, including Giorgetto Giugiaro, who designed the Ferrari 250 and the Maserati Ghibli, before stumbling upon a shy and outspoken Ive in Apple’s design lab.

The Ferrari meeting was most likely a friendly chat between the CEOs of companies that have much in common concerning their respective design and engineering expertise.

So, the iCar, anyone?