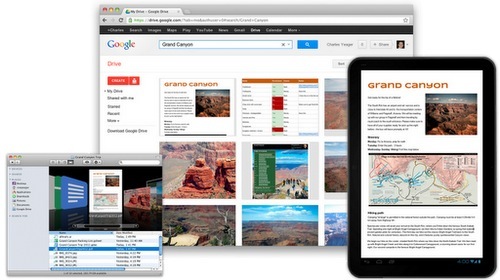 Just as Microsoft took the wraps off of paid storage tiers for its SkyDrive service yesterday, Dropbox updated its iOS and desktop apps with the ability to easily grab a public link for any file or folder on your machine or Dropbox. And now, Google has just beefed up its own cloud storage by launching the brand new Google Drive service, as rumored.

And just as we were processing this news, Google’s official video introduction to Google Drive went live on their YouTube channel…

The search company ‘accidentally’ leaked details pertaining to Google Drive on its French blog earlier today. They quickly removed the original post, but not before Gerwin Sturm saved a copy and posted a translated version on his Google+ profile. Shortly thereafter, Google officially published the post as it formally launched Google Drive.

Celebrating the launch, Google also bumped up Gmail storage from seven and a half gigabytes to ten gigabytes of free space per user, the Gmail team announced in a blog post. The increase will take effect over the next 24 hours.

As for Google Drive, the Mountain View, California-headquartered search Goliath says “Google Docs is built right into Google Drive, so you can work with others in real time on documents, spreadsheets and presentations”.

The company promised to release iPhone and iPad clients “in the coming weeks”. Google Drive for Android and clients for Windows and Mac PCs are both available for download now, as part of today’s announcement. Desktop apps detect whatever gets thrown inside the Google Drive folder on your machine and sync files with the cloud, mobile apps and the web version of Google Drive, also automatically syncing any changes made to the files inside the special folder.

According to the official blog post, paid tiers are available for 25 GB, 100 GB or 1 TB storage upgrades, priced at $2.49, $4.99 or $49.99 per month, respectively. The storage upgrade page is available here, providing a handy overview of your use of Drive, Gmail and Picasa storage. 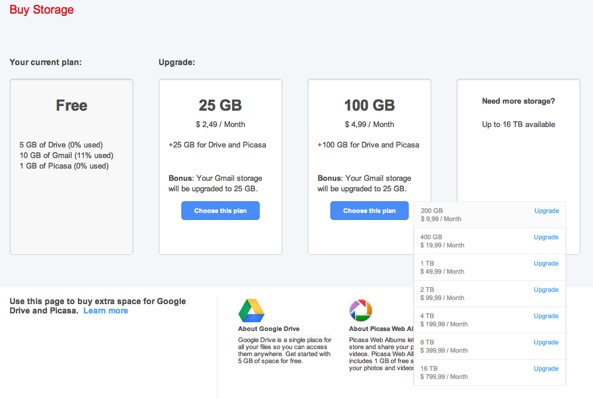 The 100 GB tier, likely to be the most popular, translates into $59.88 annually. Now, that’s much cheaper than the $14.99 per month for hundred gigabytes of storage space over at SugarSync or – in the case of Dropbox – $19.99 per month, or $199 per year. Microsoft undercuts Google Drive, however, pricing a hundred gigabyte tier at $50 a year.

However, as The Verge points out, with these new tiers Google has actually raised storage prices.

When you upgrade to a paid account, your Gmail account storage will also expand to 25 GB of free storage space. As has always been the case, Google Docs are not counted in the quota of storage space.

The service can transform scanned documents into digital versions for easy search. It also features image recognition and Google’s trademark search capabilities are deeply integrated into its bowels. You can search by keyword and filter by file type, owner and more.

As for image recognition, “if you drag and drop photos from your Grand Canyon trip into Drive, you can later search for [grand canyon] and photos of its gorges should pop up”. The company notes that this technology is still in its early stages, but they expect it to get better over time.

And here’s the official Google Drive clip that just went line on YouTube.

The video’s description includes a link to get more information on Google Drive, available at drive.google.com/start.

Other features include the ability to add and reply to comments on any media (PDF, image, videotape, etc.) and get notified when other people comment on or wish to share documents with you.

Though Google Drive appears to be an enterprise-focused service tied to the Google Apps offering, the company made sure to include a few consumer-centric features.

Drive is built to work seamlessly with your overall Google experience. You can attach photos from Drive to posts in Google+, and soon you’ll be able to attach stuff from Drive directly to emails in Gmail. Drive is also an open platform, so we’re working with many third-party developers so you can do things like send faxes, edit videos and create website mockups directly from Drive. To install these apps, visit the Chrome Web Store—and look out for even more useful apps in the future.

As the battle for cloud storage supremacy heats up, iDownloadBlog put together a handy price matrix providing an easy overview of paid options from Apple’s iCloud, Microsoft’s SkyDrive, Dropbox and SugarSync.

Will you use a Google Drive or does it look like yet another me-too crappy service from Google?

Walt Mossberg likes it a lot. In his tests, Google Drive “worked quickly and well, and most of its features operated as promised”.

As for me, I’m not sure I feel comfortable knowing Google scans and indexes all the files uploaded to Google Drive.