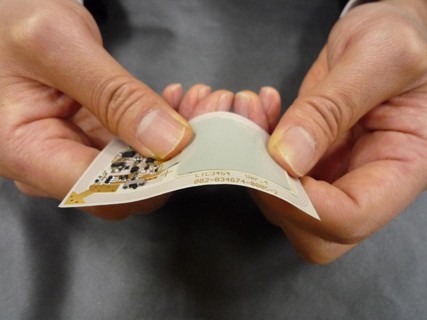 What you see here is a brand new breakthrough battery design from NEC called Organic Radical Battery (ORB). Measuring just 0.3mm in profile thanks to the use of polymer film of 0.05mm thickness, these ORBs are just a fraction of the somewhat bulky lithium-ion polymer batteries found in today’s smartphones and other portable devices.

What’s best, the tech sports fast charge time and is is completely eco-friendly, unlike their lithium-polymer counterparts that contain some harmful elements. Apple’s iOS gadgets and notebooks currently utilize the lithium-polymer battery technology.

According to a new report, Apple is interested in using the extremely thin yet powerful ORB battery technology in its revamped next-generation iPhone, expected some time during the early-summer or Fall.

According to Wikipedia, ORBs have a very fast charge time of about 30 seconds versus lithium-polymer batteries that typically require more than an hour for a full charge. Another advantage of ORBs is their relatively high energy density of one mWh per square centimeter.

The technology is also being welcomed by environmentalists because ORB batteries do not contain any of the heavy metals that pose the problem of proper disposal.

A report by International Business Times alleges that Apple is considering this technology in future devices:

This time, Apple could go green and opt for eco-friendly features in its next generation devices. […] Apple is expected to use the mesmerising ORB in its iPhone 6.

NEC says ORBs have the capacity of 3mAh, the rated output of 5kW/L and maintain 75 percent of their capacity after 500 charge-discharge cycles. This is enough to power RF tags, electronic paper and tiny displays on credit cards.

The problem is, the lithium-polymer battery technology utilized in the iPhone 4S provides the output of 1432mAh. It’s therefore unclear how ORBs could be a fit for the power-hungry smartphone unless Apple has a custom design in mind that combines dozens of ultra-thin ORBs in order to achieve a desired output.

That being said, you should take this rumor with a healthy dose of skepticism. The article goes on to revive the old curved glass screen rumor based on this sketchy story claiming Apple purchased 200 cutting machines to cut the curved screens.

The tech giant has contacted G-Tech and Fuji Crystal, the lens technology companies. Both the companies are major sources to supply the required equipment to polish the curved glass. Hence, the Organic Radical Battery could be easily incorporated into the curved screen.

I’m not convinced that ORB technology is mature enough to be used in smartphones. Of course, it is also entirely possible that Apple and NEC are working together to advance ORBs.

After all, the Cupertino company does work closely with its part suppliers and is known for enjoying preferential treatment from the likes of Intel, Nvidia and other major technology players.

For now, I’m as skeptical as the other guy.

What’s your call? Could there be any substance to this rumor?