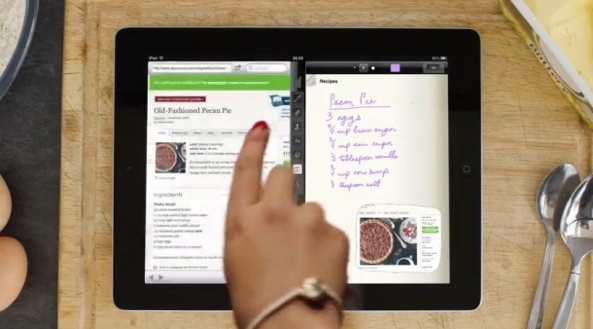 Remember Microsoft’s Courier tablet project? And a particularly lovely concept video that had been making rounds in the months leading up to the 2010 iPad introduction? We were impressed with Microsoft’s bold take on tablet functionality, calling for a dual-screen device with an innovative interface letting one easily jot down notes, set reminders, glance over your day’s agenda, edit documents and so forth.

While the iPad popularized an entirely different user interface paradigm for the sake of simplicity and ease of use, some people have remained quite fond of Microsoft’s concept, yours truly included. Well, how about an iPad app that essentially turns your tablet into a Courier-like thing? First announced a year ago, it only got approved yesterday and is now available for download, priced at three bucks…

Filed as a collaborative content creation app, Taposé centers around a split-screen interface, allowing you to, say, drag addresses to Maps for directions or drag and drop from Safari. The Slide Bar feature lets you put frequently-used items such as notes, images and so forth, in the middle bar.

Collaborating on content in real-time requires a Taposé subscription that offers 400MB of storage space free of charge. Unlimited data tiers are also available for purchase from within the app.

The Tapose team explained hurdles with getting the app into the App Store, writing in a blog post:

It only took four months, three rejections, one appeal win and then reversal of said appeal, management UI review, and then one more final review for good measure to get Taposé approved.

It’s been a long road to get approval from Apple to sell the app in iTunes. Monnig said in early November that he expected to receive approval by Thanksgiving. The app was initially rejected because it ran two separate windows, and then because it used widgets showing calendars and reminders in a way that violated Apple’s rules for apps… After fixing those issues, Tapose hit another hurdle earlier this month regarding in-app subscriptions for its cloud-based storage that renewed automatically every month. After changing the pricing to a yearly subscription that didn’t automatically renew, the app was approved.

By the way, if you’ve ever wondered why the heck Microsoft killed the Courier project, check out this inside story by CNET from last November.

It’s interesting that the project is being backed by J Allard who used to head the Courier project at Microsoft, but left abruptly. The team had also advertised the app over at Kickstarter and actually met their goal of raising $10,000 for the project.

Here’s a quick video tour of Taposé for iPad.

They are already hard at work developing a “huge” 2.0 update that will “blow your mind” and will be like “comparing the first iPhone with the 3G”.

iTunes reviewers seem to like the app, sans its unresponsiveness. Here’s to the hoping they address the annoying laginess in a future update.

I could see myself using Taposé for iPad to improve my productivity, but if there’s one thing I hate in an app that’s gotta be an unresponsive user interface.

How do you like Taposé for iPad? Is it everything you’ve been hoping for?