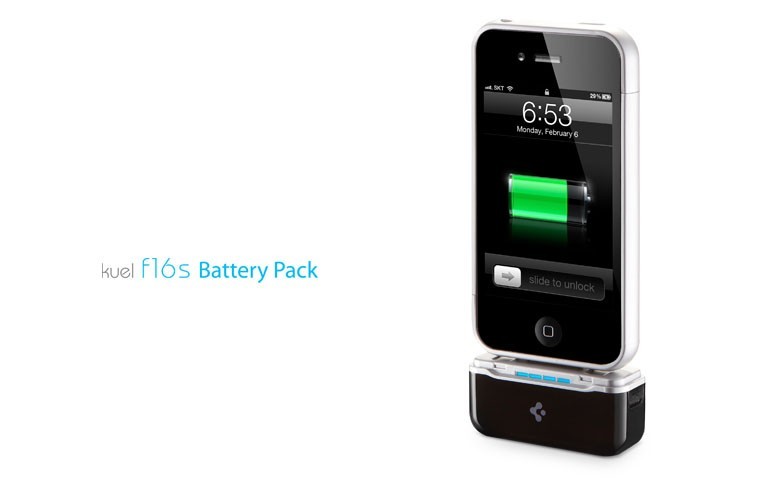 There is no doubting that our iOS devices are beginning to use even more power than their ever-increasing batteries can provide them. It’s an unfortunate fact that while we continue to crave smaller, thinner and lighter device, something inevitably has to give. In most cases, that thing is battery life.

The iPhone 4S for example isn’t exactly known for its ability to hold a charge. We’ve covered various power-related issues with the iPhone 4S over the months since its release, and alas, things don’t really seem to have improved with subsequent iOS releases. What we need is a way of extending our iPhone’s battery prowess, and the easiest way to do that is to get a battery pack.

One battery pack that we’ve been putting through its paces recently is the SPIGEN SGP F16s battery pack for the iPhone. After a few weeks of living with the F16s and at times very much relying on its ability to keep an iPhone going beyond its usual capacity, we’re finally ready to announce our verdict…

But first, some specs.

The F16s sports a 1620mAh internal battery that is charged via the included USB to Micro-USB cable, and comes in one of three colors: Soul Black, Infinity White or Sherbet Pink. The USB cable does not come with a plug of any description which may irritate some, though I took to simply using one of the umpteen Apple power bricks I have laying around the house. Alternatively you could obviously use a computer to charge the F16s, too. 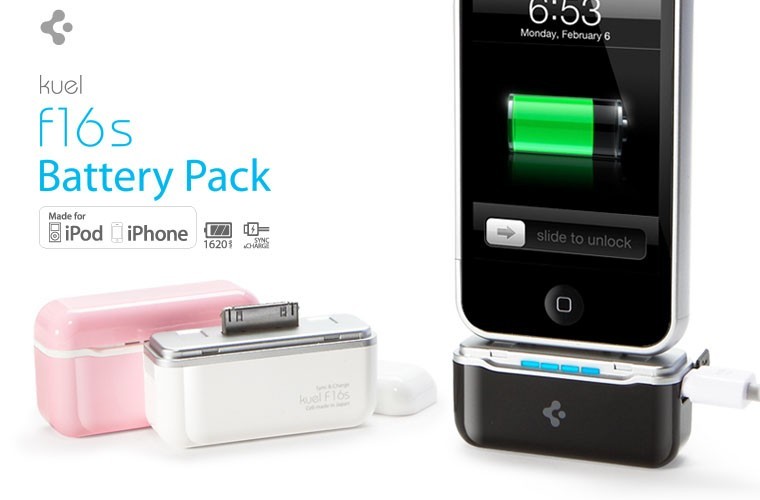 The device itself features no buttons, and the only moveable part is the dust cap which hides the 30-pin dock connector you will use to charge your iPhone (or iPod touch, for that matter) and makes for a rather fetching little battery.

The F16s features a row of lights which display the amount of power left inside, with each light accounting for 25% of the total power. It’s pretty standard fare, and appears to report accurately from what I’ve seen. The only other part of note is the flap which covers the Micro-USB port.

That USB part, whilst we are at it, is worth a mention. Unusually, the port allows an iPhone to be charged and synced right through the battery pack. We wouldn’t be updating iOS through it, but it is a feature which most of the competition is lacking. The F16s also charges the attached iPhone before charging its own battery, which is pretty neat, too.

In my testing the F16s will achieve around an 80% iPhone 4S charge from a completely dead handset. I’ve had slightly better and slightly worse results, with 80% being the average over the few weeks I have been using the battery pack. I’d obviously love to get another full charge out of the thing, but I would rather an 80% charge than the F16s be any bigger. It’s a compromise that I’m willing to make.

At $69 from the company’s web store, the SPIGEN SGP F16s battery pack does a job, and it does it well. It has proved more than useful for me over the last few weeks, and is something I will be keeping in the car for those times when I just can’t get a full day’s use out of my iPhone 4S without it dying. With that being the case more often than not these days, the F16s is only going to get more and more use.

And that’s just fine with me.