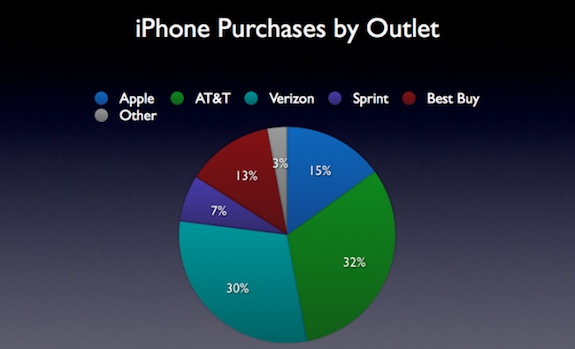 Back in 2008, Apple made the decision to allow Best Buy to carry and sell its beloved handset. And that choice is proving to be a fantastic one today as reports are coming in regarding the retailers’ iPhone sales.

Citing a study from Consumer Intelligence Research Partners, AllThingsD reported this morning that Best Buy outlets have been selling almost as many iPhones as Apple itself…

CIRP tracked iPhone purchases over a three month period from December 2011 to February 2012, and the results are rather interesting. Over the test period, 76% of iPhones were purchased in physical retail stores, and 24% of them were bought online.

The most notable find, however, was that Best Buy was responsible for 13% of all iPhone sales during the period. That’s not bad considering that Apple itself was only responsible for 15%. But this phenomenon can actually be explained with simple math.

For starters, with 1100 retail outlets worldwide, Best Buy has roughly four times the amount of stores that Apple does. It’s also worth noting that Best Buy is one of the few third-party iPhone resellers that carries all three carrier models (Sprint, Verizon, AT&T).

Regardless, the electronics giant is still performing at a high level. Especially given the fact that “other stores,” including Walmart and Radio Shack, only accounted for roughly three percent of all iPhone sales during CIRP’s research. Interesting.