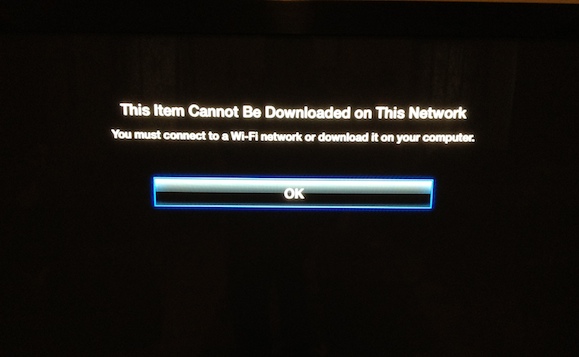 Have you recently been having problems with your Apple TV not downloading iTunes content? Well if so, you’re not alone. TheNextWeb is reporting that Apple has just confirmed that it is experiencing some issues with its iTunes service.

The problem is accompanied by an error message that reads “this item cannot be downloaded on this network, you must be connected to a Wi-Fi network,” and is preventing folks from downloading or streaming content to their Apple TVs…

Judging by this thread in Apple’s support forums, the issue doesn’t seem to be very widespread. But for those that are experiencing problems, there isn’t much light at the end of the tunnel:

“I just spoke with Apple Support, they are currently having a problem, they don’t know what is causing it. It seems to be on all platforms and the problem only occurs when you try to download anything over 15MB. They do not have an ETA yet for when this problem gets resolved…”

In perhaps a related note, several users have reported to us over the last few days that the App Store has been seeing similar problems. Apps will constantly show a download status of ‘Waiting,’ and will either take longer than usual to download, or time out completely.

It’s kind of frustrating that there isn’t an ETA for a fix on this yet, but at least it doesn’t appear to be affecting very many users. We’ll let you know if Apple makes an official statement regarding the outtage.

Have you been experiencing problems with iTunes or the App Store?