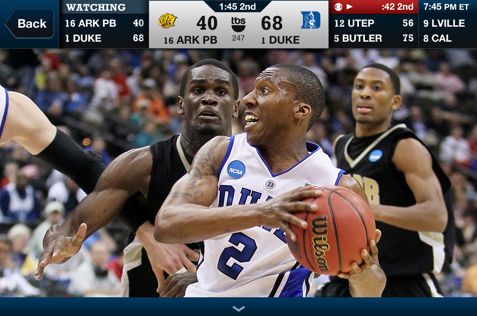 It’s that time of year again. The top college basketball teams from around the country are about to square off in a grueling two week, 67-game tournament to determine who is the best of the best.

Still trying to figure out how to follow the action when you’re away from your TV set? Look no further than the official NCAA March Madness Live application for iOS…

NCAA March Madness Live will let you watch all 67 games in real time on either your iPhone, iPad, or iPod touch. It also has an extensive list of other features including:

The app itself is free. But to see all 67 games you’ll have to pony up $3.99 via an in-app purchase. Otherwise you’ll still be able to listen to the audio of each game, but you’ll miss out on the exclusive video footage (practices, highlights).

The tournament starts March 13th, so you better hurry. NCAA March Madness Live is available now, in the App Store.