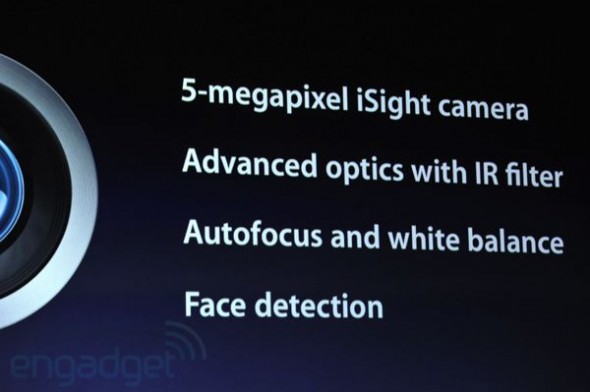 Apple has just announced its new iPad and is going down the list of its new features. We’re now talking about the tablet’s new backside camera and it looks like that, as expected, it’s received a major update.

The camera system in Apple’s new tablet is very similar to the setup in the iPhone 4S. It has a backside illuminated sensor, 5 element lens, IR filter, and ISP (Image Signal Processing) built into the slate’s new A5X processor…

The camera itself has a 5MP sensor and is loaded with features. Auto exposure, auto focus, it’s all there. It even has built-in face detection, presumably to help sort through photos by faces in new photo management software (similar to iPhoto).

And surprise, the new camera can also capture full HD 1080P videos. Since Apple seems to be taking everything else 1080P today, why not?