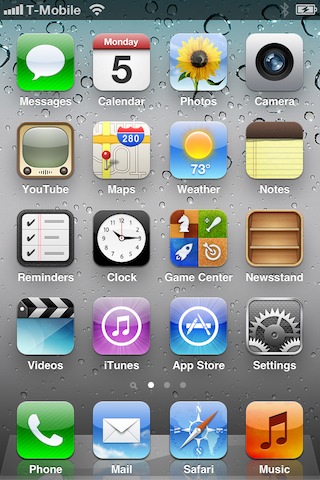 I’ll admit that I’ve never used a Gevey SIM interposer, or anything like it in the past, but I figured I’d give it a shot with the iPhone 4S.

The iPhone 4S has its own special SIM interposer called the R-SIM II Ultra S, which was recently released.

I’m happy to report that this is by far the easiest method for “unlocking” your iPhone 4S, and using it with T-Mobile or virtually any other GSM carrier. And guess what, no jailbreak is required.

How to Unlock Your iPhone 4S using the Gevey R-SIM Ulta S II:

Step 1: Remove your SIM tray from your iPhone 4S.

Step 2: Place the R-SIM in the holder that comes with it, and place your SIM card from your desired GSM provider on top of the R-SIM.

Step 3: Place the combined SIM tray and R-SIM + SIM card in your iPhone 4S and wait until you see the carrier name for the SIM card you wish to use.

Since there’s currently no version of UltraSn0w that works with jailbroken iPhone 4S’ unlocking options aren’t nearly as plentiful as they have been on pre-4S devices.

The R-SIM is by far your best bet for using your factory locked iPhone 4S on other carriers outside of purchasing a factory unlocked phone.

What’s even better is that no 112 dialing is required. It’s literally a plug and play device.

That was one of my stipulations before even attempting to use this device — I didn’t want to dial 112 and call emergency services unnecessarily. That’s just inconsiderate in my opinion, especially when there are people who are calling that service in dire need of assistance.

Unbeknownst to me, the first device they sent to me did require you to dial 112. In fact, I tweeted about it when it first arrived, but as you can see, I never reviewed it. That’s because I kindly told them that I wasn’t willing to review the device if it used 112.

Thankfully, they contacted me and stated that version 2 of the device was just released, and they would be sending it my way. Version 2, as it turns out, requires no 112 dialing.

So that is why you see this video review today, as I just received version 2, and I’m happy to report that it works just as advertised.

Let me know what you think. Would you consider taking this route to unlock your iPhone 4S for use with other carriers?