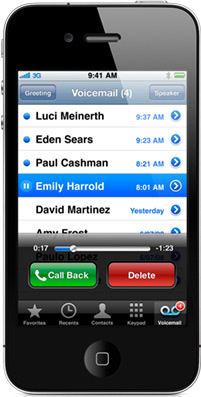 Adding to its large array of ongoing lawsuits, Apple has been sued by patent holding company Brandywine Communications Technologies over two voicemail patents. The lawsuit was filed in a local Florida court on Tuesday, reports GigaOm.

Brandywine’s reputation in the corporate community is short of good. Last week, Verizon sued Brandywine for patent trolling. Verizon described Brandywine as being “a patent holding company that is in the business of enforcing patent rights through the filing of various lawsuits.”

In September, Brandywine also sued Motorola, HTC, and others on similar grounds. This time they’ve singled Apple out.

Technologies both patents describe are used in both Apple’s iPhone and iPad — “where the called party listens to the voice message while viewing the data message.”

This is far from the only legal proceeding Apple currently has on their plate. Not only are they fighting with Proview over the trademarked term ‘Ipad’, but Apple is also in court with Samsung and Motorola worldwide.

Apple’s many qualms in court look far from being over.