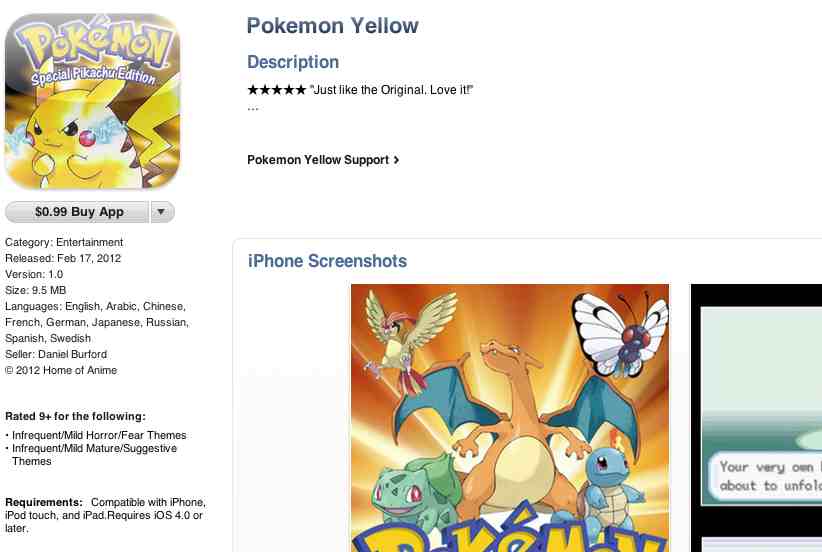 It’s a dream come true for any Nintendo fanatic: Pokemon landing on the iTunes App Store. Looking on the App Store’s top-charts might make you believe the day has finally come, but hold tight before pressing that purchase button. It’s a fake.

An app called Pokemon Yellow priced at $0.99 appeared on the App Store over the weekend, quickly rising to number three on the top-paid charts. However, buyers quickly realized that the app wouldn’t even go past the title screen, or launch in some cases…

Many developers have made the questionable move of copying a game that is not theirs by throwing a custom paint job over it and throwing it on the App Store, but Pokemon Yellow comes no where close to doing it legally. In this case it looks like the developer, House of Anime, has taken several elements from Pokemon’s original creator, like screenshots.

So how did this app get into the App Store with Apple’s strict policies?

Apple has been known for missing a few apps and letting them slide into the App Store. In most cases Apple is quick to act, but that’s not always the case.

Earlier this month, Apple removed the fake ‘Temple Jump’ app, which impersonated the free popular Temple Run game people are raving about these days. After making some serious noise in the developer community, Apple was quick to respond.

Sorry Pokemon fans. Hopefully there is a day where you will be playing Pokemon to your heart’s content on your iPhone and iPad, but that day isn’t here yet.

Were you let down by this?