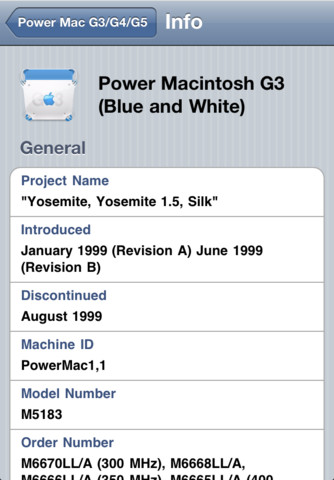 We recently told you about the success of the App Store in reaching nearly 25 billion Downloads. That’s a truly amazing statistic. In that 25 billion there will no doubt be some good apps, some poor apps and some down right ugly apps. The good folks over at Redmond Pie have come across a fine little app called ‘Mactracker’ which definitely fits in the good section.

Mactracker is one for the nostalgic Apple fans out there, offering in depth details on every Apple computer ever made with full technical specifications including things like processor speed, memory details, graphics card, optical drives, supported OS versions, expansion options and more. The App covers all bases right back from 1984 to present day…

It’s basically an Apple encyclopaedia that you can load up at home or take with you on the go. If you’re a little geeky and get into an argument with your tech buddy over the processing power of the Power Mac G3, fire this app up and the information will be there at your fingertips. In all seriousness though it’s a really powerful reference application that developer Ian Page has come up with here.

It’s also worth noting that not only does the app cover the desktop side of things it also has fully documented information regarding iOS, Mac OS X, peripherals, servers and so on. The app is very clean and easy to use and considering it’s free, it’s definitely one for the Apple enthusiast to have on their device.

Did you know that the Apple Thunderbolt Display was capable of showing 16.7 million colors and weighed in at 23.5 lbs? No, me neither, until I used Mactracker.

Could you see yourself using Mactracker for any projects you may have? If so we would be happy to see how you would digest the huge amount of information on offer.