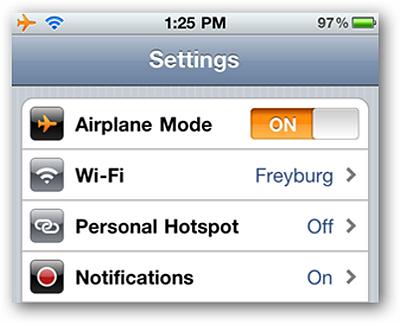 Apple is known for throwing as many patents onto the wall as possible with the aim of getting at least a few to stick. That has never been more true than since the arrival of the iOS platform with iPads and iPhones seeing more than their fair share of patent applications.

Now the US Patent and Trademark Office has laid out nineteen new patents which have been granted to Apple, and while some are Mac related, others have a distinctly iOS bent to them.

One such patent covers something that we all take for granted – the Airplane Mode feature that is built into all iOS devices, and is a God-send if you happen to use an old FM-transmitter with an iPhone…

The Airplane mode patent covers the switching on and off of the toggle that controls Airplane Mode, along with the associated animations which see the airplane logo replace the carrier and signal strength images on-screen. It may not seem like much, but check this wall of text out courtesy of Patently Apple!

Another patent covers the bend switch used in the Apple earphones which are shipped with iPhones and iPod touches. The switch, which also acts as a volume control and speaker, is detailed in patent number 8,116,503 and is complicated enough to make our heads hurt. If you’re of an engineering persuasion though, we’re sure it’s fascinating!

We’re not going to go into all nineteen patents here, Patently Apple has all the gory details as only Patently Apple can, and there are some interesting tidbits in there for the intrepid patent explorer.

There is no doubt that plenty of Apple’s patent applications never see a real-world implementation, but it’s always great to see a patent for something that we all use today without ever giving a second thought.