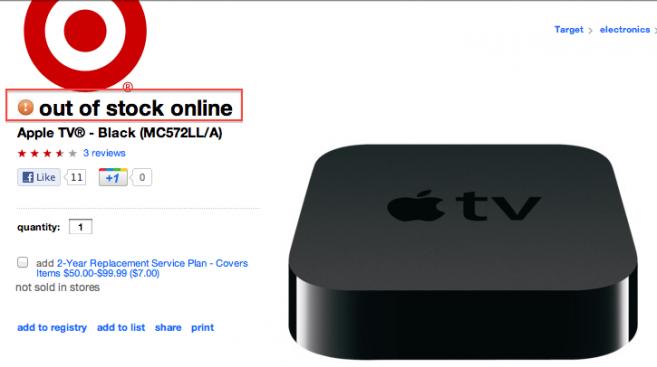 You can’t beat a bit of detective work on a Sunday morning, and that’s exactly what 9to5Mac did this weekend. While rumors of an Apple branded television are very much in vogue right now, the old warhorse the Apple TV is is becoming even more left out than it already was.

The question 9to5Mac poses is whether the humble Apple TV is set for an update soon, and the evidence certainly suggests that it might actually be the case, thanks to a bit a nosey around various online retailers and the help of an anonymous tipster…

9to5Mac’s tipster, working at an un-named Best Buy store, noticed that the Apple TV is actually out of stock currently, which is strange in itself. Even more odd is the fact that he was unable to order a unit for his customer, suggesting that the product may now be classed as “end of life” by Apple.

“A customer was inquiring tonight about Apple TV. However right now we are out of stock (Which hasn’t happened since I started). Not only were we out of stock, but I was also unable to order one from our product ordering system (OMS). Product was listed as “currently unavailable”. From prior experience, this usually is associated with a product that is being “discontinued.”

A cursory glance around various online stores such as Target, Walmart and Amazon shows a similar story, with Amazon now calling the Apple TV2 the Apple TV (2010) which could again point to an imminent refresh.

Amazon also claims to be able to get a new Apple TV to you in 2-5 weeks, which fits in nicely with the expected iPad 3 announcement window. While interesting, we think this might be one giant coincidence, but you just never know in this game.

So if Apple is indeed updating the Apple TV, what features would you want them to add?