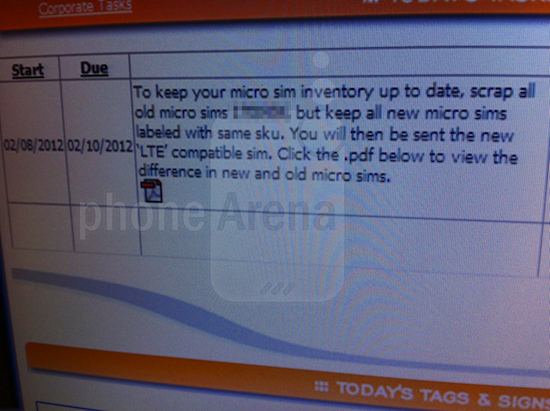 Among the rumors we’ve heard regarding Apple’s next-generation tablet, LTE compatibility has come up a number of times. And last month, Bloomberg seemed pretty confident when it reported that the iPad 3 would feature the 4G technology.

Now a new report from PhoneArena adds some weight to the argument, as the site has just learned that AT&T is about to receive a whole new batch of LTE-capable micro SIM cards. Could these be for next-generation iPads and iPhones?

The tipster is quick to point out that these new micro SIM cards could be for the upcoming Nokia Lumina 900, a Windows Phone that has already been announced to be LTE-capable. But it’s hard to ignore the fact that Apple uses micro SIM cards in both its smartphones and its tablets.

Even without the SIM cards, we’ve seen a ton of other evidence suggesting that Apple is working on implementing LTE technology into its mobile products. Last year Apple reportedly had LTE equipment installed in its retail stores, and the company even posted a job listing calling for field test engineers with LTE experience.

Of course, all of this is still just speculation at this point. But now that AT&T — Apple’s goto-carrier in its largest market — has rolled out its LTE network, and carriers in other countries are starting to follow suit, we wouldn’t be surprised to see Apple finally take the full 4G plunge with its upcoming tablet.

What do you think? Will the iPad 3 feature LTE technology?